Side effects of cigarette study 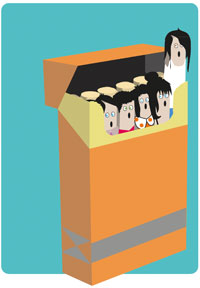 Philip Morris Interna­tional, the maker of Marlboro cigarettes, is trying to force a British university to reveal details of its research involving thousands of children aged between 11 and 16 about their attitudes towards smoking and cigarette packaging.

The demands from the tobacco company, made using the UK’s Freedom of Informa­tion law, have coincided with an Internet hate campaign targeting resear­chers involved in the study.

Philip Morris says it has a “legitimate interest” in the information, but researchers at Stirling University’s centre for tobacco control research say that handing over data would be a gross breach of confidence and jeopardise future studies.

“They wanted everything we had ever done on this,” said Professor Gerard Hastings, the centre’s director.