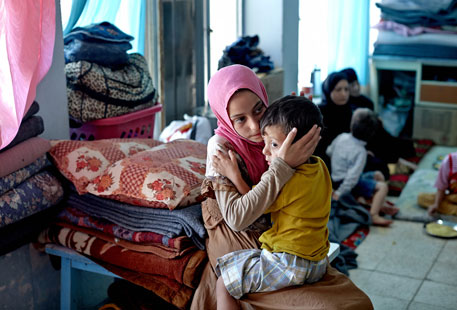 Barely a month into the latest American bombing campaign in Iraq, and the conflict has displaced 1.8 million people in the country. Large groups of people have been forced to move as many as three times—all leading to major health risks, according to an estimate by the UN.

In June the WHO had declared Iraq’s humanitarian health crisis a Grade 3 emergency, which indicates the highest degree of severity.

“Political, security, and humanitarian challenges are driving the health challenges across the country, where national health systems are under great stress, with many hospitals and clinics damaged, and healthcare workers often caught up by the insecurity,” says Syed Jaffar Hussain, WHO’s representative to Iraq.

As insecurity and massive population displacement expose people, especially the most vulnerable, to a wide range of health concerns, one of WHO’s main concerns is to prevent and control the spread of communicable diseases such as diarrhoea, respiratory infections and other diseases related to overcrowding.

Earlier this year, two polio cases were confirmed in Iraq that had been polio-free for 14 years. Despite ongoing conflict, the health ministry, with the support of WHO and Unicef, launched a mass immunisation campaign in August to tackle the re-emergence of polio virus. About 65,000 internally displaced children were vaccinated in the Kurdish Duhok governorate alone. The campaign included Syrian children living in refugee camps in Iraq.

There is also a high risk that measles could spread. The disease is endemic in Mosul, which has seen half a million people displaced since June 2014.

“The deteriorating health situation and rising temperatures increase the risk of epidemics,” says Hussain. “All the risk factors that enhance the transmission of communicable diseases in emergencies are present in the current crisis in Iraq. Cholera is endemic in the northern part of Iraq and has the potential to cause large-scale illness and death.”

WHO estimates that approximately US $150 million is required to respond to the health needs of more than 5 million beneÂ´Â¼Ã¼ciaries.

In addition to its massive population of displaced people, Iraq hosts 250,000 Syrian refugees in the north who require humanitarian assistance and whose health needs place additional strains on Iraq’s fragile healthcare system.