It is popular in periods of Hindu religious fasting like Navratri. It is also commonly found on the shelves of health food stores. But for the tribals in the Sahyadri hills in Maharashtra, buckwheat is a way of life.

Unlike in the hilly regions of northern India where kuttu, as the milletlike crop is called in Hindi, is found in plenty, spotting buckwheat fields can be difficult on the Sahyadri hills. There is no mention of the crop in the state agriculture department records. But elders in the Mahadeo Koli and Thakar tribal communities in Ahmednagar district say they have been growing the crop for generations. “Batu (as buckwheat is called in the Sahyadri region) is an important part of our tradition. It keeps us fit and healthy,” said Sakharam Dindale, an octogenarian of Dhamanvan village in Ahmadnagar.

Buckwheat (Fagopyrum esculentum) is not a grain as the name suggests, but a fruit seed. It ripens in November. Tradition of the Sahyadri tribals ensures that everyone eats it, at least once a fortnight. “On days of religious significance, such as Ekadashi, those who observe fast must eat batu bhakhar (thick chapati made from buckwheat flour),” said Dindale. Since it is easy to digest and high in nutrients, laddoos (sweet balls) made of buckwheat are given as food supplement to lactating mothers. Those recovering from ill nesses are recommended buckwheat soup for quick recovery. The village wrestlers too vouch for its goodness, Dindale added.

Modern science agrees with Dindale’s ancestral wisdom. The highfibre seed is known to lower blood pressure, blood sugar levels and cholesterol. It is rich in nutrients like flavonoids that protect against diseases by extending the action of vitamin C and acting as antioxidants. It is a good source of alphalinolenic acid, a type of essential fatty acid our body needs. “The younger generation does not want to eat buckwheat,” rued Nanobai Kawate of Karewadi village. Even on the days of fast they prefer eating sago, which is less nutritious, she said. This could be because preparing the flour takes time, Kawate said as she demonstrated how to make batu bhakhar.

It takes about five hours to husk the seeds, prepare the flour and make hot crispy bhakhars. It tastes similar to chapatis made from ragi, but are softer and have more pungent flavour. Kawate recommends eating the bhakar with a spicy dip, amti, made from groundnuts and green chilies. 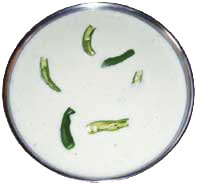 Method: Mix the flour, salt and oil. Add a little warm water to it and mix. Form a heap and leave it covered for 30 minutes. This would allow the flour to absorb water and make it pliant enough to knead. Take enough dough for one bhakhar at a time, add a little warm water and knead it again to soften it. Roll it into chapati, about four mm thick, and put it on a hot skillet. While roasting, apply a thin coat of water on the upper surface of the bhakhar. This helps it retain moisture and form a good crust. Turn the sides and roast thoroughly, rotating the chapati at intervals to prevent it from sticking to the skillet. Remove it from the skillet and roast on direct flame till it is crisp.

Groundnuts: 50 gm
Green chillies: six or seven, or to taste
Salt: to taste
Water: 1½ cup or as required

Method: Grind groundnuts and green chillies into a thick paste. Add salt and water to the paste to make it thinner than required. Bring it to boil on a slow flame and allow it to simmer for five minutes. The recipe adheres to the rules of traditional tribal fast. One can add a seasoning of mustard, cumin seeds and curry leaves to the dip to enhance its flavour.