The Rajasthan and Haryana governments feel threatened by the Centre's move to stop industrial, mining and quarrying activity in the Aravalli region. Environmentalists, on the other hand, applaud the move 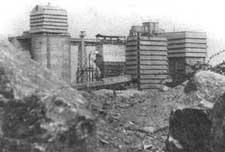 The impetus was apparently provided by the fact that the Rajasthan and Haryana governments have ridden rough-shod over the natural wealth of this fragile region. Industrial, mining, quarrying and construction activities have ruthlessly and rapidly degraded the hill range which stretches all the way from Delhi to Gujarat and cuts Rajasthan into two. Today, it is probably the most degraded hill range in the country.

On May 7, the Centre gazetted an earlier notification to the two state governments, listing five types of commercial activity that will require the sanction of the Union ministry of environment and forests (MEF) if they are to be carried out in the districts of Alwar (Rajasthan) or Gurgaon (Haryana). These include the setting up of industrial and electrical facilities, mining, quarrying, tree-cutting and construction.

Further constraints are imposed on expansion and modernisation of industrial plants as well as on new licences. The May 7 notification is the first time in the country that the Environment Protection Act (EPA) has been enforced to regulate development in the interests of the environment.

Another notification, issued on January 29, which applies across the country, has listed 24 industries for clearance under Central jurisdiction and 45 for clearance by all state governments. Several states have violently opposed these clauses on the grounds that, as a consequence, a significant portion of their development work will come to a halt. The Centre, which was to have either gazetted or dropped this notification by May-end, has postponed its decision till the end of July.
What has aroused the states' ire is the fact that the notifications give the MEF the authority to "review the environmental clearance given to any project by the state if there is a complaint or if there is prima facie evidence that norms specified by the ministry are being ignored by the state...."

Expectedly, the matter is slowly devolving into a question of the states' powers. It has already led to violent outbursts from the chief ministers and bureaucrats from Haryana and Rajasthan. Rajasthan chief minister Bhairon Singh Shekhawat complained bitterly, "I do not have powers, even as chief minister, to put up lamp posts in my state."

Shekhawat sees the May 7 notification as an issue centering on the relative sharing of powers between the Centre and states. In a letter to the Prime Minister, he has written, "I have all along been holding the view that the Forest Conservation Act of 1980 has retarded the pace of development and should therefore be scrapped.... The noble objective of deforestation has not been achieved after the enactment of the Act." The Act prohibits state governments from diverting forest land under its control for developmental purposes without prior permission from the Centre.

Talking to Down To Earth, he questioned, "Why this farce of setting up the Sarkaria Commission and making promises of more powers to the states if the Centre wants all our powers back?"

Shekhawat expressed dissatisfaction with the percepts based upon which the Centre is fighting environmental degradation. "What kind of environment are we talking about? Because of Ranthambhore National Park, we cannot develop Sawai Madhopur town. Because of Taj Mahal, we cannot have the Dholpur power station. And to save crocodiles, we cannot build a hydropower project on the Chambal."

Haryana chief minister Bhajan Lal was full of criticism of "Central interference" and "unwarranted policing" of state affairs. The Haryana government's supercession of the state pollution control board by appointing a state administrator, added further fuel to an already roaring fire. The supercession is, allegedly, an attempt to pre-empt any possibility of the Central Pollution Control Board taking over the state board's function using the latter's "inaction" as a pretext.

Shekhawat's discontent was echoed at the last National Development Council meeting. Several chief ministers, including Shekhawat and Bhajan Lal, accused the environment ministry of being the biggest hurdle to development. The Prime Minister left it to Kamal Nath, Union minister of state for environment and forests, to respond to the angry outbursts.

There is speculation also that the notification may have been inspired by the Greening of Aravalli project, which is being jointly funded by the European Economic Community and Japan. There would be no point in carrying on with such a project if devastation were not checked simultaneously.

Environmentalists have, overall, welcomed the notification as have the forest departments of both states. Their reaction is typified by what Shekhar Singh, former adviser to the Planning Commission on forests and environment, says: "The Centre has not done anything wrong.... once the government of India has admitted that Aravalli is degraded, it has no choice but to apply the EPA."

He is supported in his stand by the state forest departments. S K Varma, principal chief conservator of forests, Rajasthan, said, "The notification is a shock treatment to politicians and planners and they now ought to take the restoration of the ecosystem more seriously."

Tarun Bharat Sangh, a non-governmental organisation based near the Sariska Tiger Reserve, which has filed a case in the Supreme Court protesting illegal mining in the forest area of Sariska, does not trust the state government. Sangh spokespersons say that despite the stay order on mining given by the Supreme Court, the state government has not stopped issuing fresh mining leases. Mining is extremely important for Rajasthan's economy: the state earned Rs 86 crore in sales tax from this activity in 1991-92 and considerably more from royalties on mining. There are over 26,000 mines in the state.

In Gurgaon, builders have been on a collision course with the authorities since early 1990, when Maneka Gandhi, then minister for environment and forests, had written to chief minister Om Prakash Chautala directing him to take action against two builders -- Ansals and Aggarwals -- for unauthorised construction. In 1991, MEF officials carried out a site inspection of construction works in Gurgaon and reported "large-scale illegal colonisation by Delhi builders".

Much of this was done, they alleged, with the collaboration of local politicians and bureaucrats. The state was, therefore, not "in a position to take remedial measures", they concluded. Today, the builders have organised themselves into a powerful lobby to fight the May 7 notification. (See box). Construction activities have resulted in extensive quarrying, cutting down of vegetation, unprecedented demands on groundwater, with the result that the water table is falling and adversely affecting the adjoining agriculture lands.


The dominant feeling among state government officials is that the Centre is being insensitive to the problems of development in the areas notified.

If the specification that no project may be set up within a radius of 25 km of any national park or sanctuary and within a 10-km radius of a reserved forest or an area designated ecologically sensitive is accepted, studies by the Rajasthan Industries and Investment Corporation (RIICO) have estimated that 13.32 million ha -- that is, about 92 per cent of the total non-arid zone of Rajasthan -- will fall under the purview of the notification.

Planners in the states feel the Centre has overstepped its environmental brief. While some are willing to accede that gair mumkin pahad (hilly, wooded terrain) and contiguous lands could be notified, they see no reason why the notification should include even non-hilly categories of wastelands. Rajasthan chief secretary T V Ramanan said this point had been stressed in several meetings with the MEF prior to the notification.

However, with the Centre now protecting these lands, the state governments may simply rush in to convert agricultural land for industries. This loophole could in fact compound the environmental problems of the areas notified.

Another dimension is that there are large tracts of land falling outside the purview of the notification, interspersed with small plots covered by it. "This makes it impossible to establish an industry in the entire area," says S C Mathur, chairperson of RIICO.

Alwar is slated to be home to a number of new ventures -- Escorts BMW and Ericssons, to name two. The notification is being viewed as a means to curtail such development. K K Goyal, Rajasthan's minister for industry, calls it "an expression of gross mistrust".

The Centre will have to clear all notified developmental activities now. The Rajasthan government, in its objection to the notification, has emphasised that the need for environmental site clearance should arise only in the case of big projects. "Our experience with the Forest Conservation Act has not been very happy. Obtaining clearances even in genuine cases is extremely time consuming," says Meetha Lal Mehta, secretary, agriculture and cooperation, Rajasthan.

The negative reactions from the states indicates a hardening of positions against any proposed changes towards a healthier management of the environment. However much the MEF may be criticised for its interventionist approach, the state governments cannot deny the fact that they have been prey to unscrupulous mining and industrial lobbies, and have constantly turned a blind eye to environmental problems. Few environmentalists trust the state governments. Says Kishore Saint, an eminent environmentalist of Rajasthan, "Even a stay order from the Supreme Court has failed to check mining in Sariska. What can a Central notification do?"