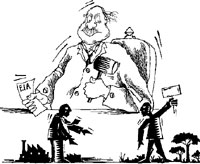 in a decision that will make industry more accountable to the people, the Cabinet secretariat on January 15 made public hearings mandatory before giving environmental clearance to any industrial project or activity, both private and government. The hearings would be conducted with respect to all the 29 industrial sectors that are enumerated in the environment impact assessment (eia) notification of 1994. These industries include mining projects, thermal power plants, chlor-alkali industries, dye factories and cement factories, among several others. The Union Cabinet has also approved the setting up of a National Environment Appellate Authority to deal with complaints against development projects that fall under the eia notification.

Any project that is environmentally sensitive, such as coastal zone projects, industries and dams, has a separate committee of experts to assess its environmental impact. The respective public hearings would be held by the committee concerned at the site of the proposed project. Besides, all the people resident in and around the area would be able to voice their suggestions or objections regarding the project. Moreover, local ngos too would have a say in the matter.

"In their report, the expert committees would have to give serious consideration to the objections raised," Gauba said. If the resultant eia fails to mirror the public view in the report, people would have the right to go ahead and appeal against it to the National Environment Appellate Authority. Implicitly, this means that copies of the eia would be available to the people on demand. However, the mef is still in the process of formulating the constitution of the authority, informed Shyam Lal, additional director in-charge of parliamentary committees.

The idea of public hearings was already present in the eia notification of 1994 although it had not been made mandatory. Section ii, sub-section iii, clause (c) of the notification states, "...Comments of the public may be solicited, if so recommended by the Impact Assessment Agency within 30 days of the receipt of proposal, in public hearings arranged for the purpose..."

Although the decision on mandatory public hearings has been welcomed by the ngo sector, doubts still persist about the appellate authority. "The move to make public hearings essential is welcome," commented Bharat Jairaj, legal adviser at the Centre for Environmental Law, an offshoot of the World Wide Fund for Nature-India. "But we have serious reservations about this new authority. For one, the eia notification is limited to only 29 industries. Moreover, it does not have the power to totally scrap any project. It also has the clause of rapid assessment in certain cases. What can any new authority do to counter the damage being done to the environment when the very basis of its functioning is flawed?" queried Jairaj.

The industry seems to be cautious about the scope of the order. "We have a significantly proactive stance regarding public hearings as that would help give a boost to industry-people relations," says A K Chaturvedi, environment counsellor at the Confederation of Indian Industry, New Delhi. But he immediately qualified his statement by saying, "But we don't think this is the right time to introduce public hearings to all the 29 sectors of industry that have been mentioned in the eia notification. The hearings should be restricted only to larger projects like big thermal plants or cement factories. We don't think it is necessary to bring in industries like small tanneries into the ambit of such hearings."

But the grudge that the industry was left in the dark about the appellate authority is obvious. Chaturvedi said ruefully, "The Centre never approached either us or even other industrial bodies like the Federation of Indian Chambers of Commerce and Industry before planning such an authority which would undoubtedly affect the industry. We have absolutely no idea about this new body's modalities."