Heat comes in from the cold 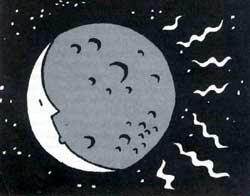 THE bright side of moon may move many a heart to romantic verse, but for scientists, it is the faint glow on the dark portion of the crescent moon that matters.

The glow is a reflection of sunlight bounced off the Earth by clouds, snow and dust hazes. The reflection, called earthshine or albedo, acts as a thermometer for the Earth -- a 1 per cent loss in the lustre of this glow would mean a global temperature rise of by 1 degree C -- and could be a reliable measure of greenhouse warming.

Usually, keeping tabs on this climatic beacon is an expensive business involving satellites. Besides costing millions of dollars, satellites also suffer from glitches such as launch delays and instrument failures. Moreover, they measure the albedo across small segments of the planet, and errors can creep in when those smallscale measurements are integrated across the entire globe.

But now astronomers at the University of Arizona and the California Institute of Technology in Pasadena have revived a 70-year-old technique that requires nothing more than a small telescope and high-tech cameras to measure Earth's albedo at least as accurately as the satellites do (Science, Vol 264, No 5165).

It was French astronomer Andre Danjon who in 1925 developed the ingenious technique to measure Earth's albedo. Danjon had devised a telescope in which a prism split the moon's image into 2 identical images, which appeared abreast each other in the eyepiece. By adjusting a diaphragm -- a device that regulates the amount of light passing through -- along one of the light paths, Danjon could dim one image until a sunlit spot (on the bright side of the moon) appeared to be as bright as an Earth-lit spot in the untouched image. By measuring the degree by which the diaphragm was adjusted, Danjon could calculate the brightness of the earthshine. The technique, including the equipment and computing time, was used in the '50s and cost a few tens of thousands of dollars.

The almost-forgotten telescope was resurrected a few years ago by Donald Huffman, a University of Arizona physicist, and his colleagues. Huffman had built an accurate model of the instrument in his garage and has been recording earthshine twice a month, when the moon is in the crescent phase.

However, there was a little scepticism about whether earthshine is a reliable index of the planet's reflectivity. "Basically," explains Gordon MacDonald, an earth scientist at the University of California, "the moon samples the light from the equator. Light hitting the polar ice caps can scatter out in many ways that never hit the moon at all." However, a computer model of how sunlight is reflected off the earth and the moon dispelled any doubts.

Now, by pooling their results and taking into account earlier observations, earthshine watchers hope to detect any trends in earthshine since 1925 and provide a yardstick for future satellite measurements.