Heat wave in the US, Europe 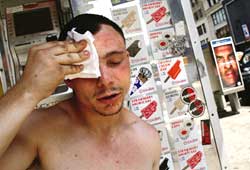 Heat wave in the US, Europe

As the us experiences a heat wave unprecedented in the past 57 years, its largest city New York has declared a state of emergency for the first time. Following weather department's predictions that the mercury level would shoot up to 43 c in the first week of August, the New York mayor directed city agencies "to take whatever steps necessary to protect the well-being and safety of city residents in the face of excessive heat". Due to overuse of air conditioners, the demand for power has also gone up, leading to rolling blackouts across the country. Power companies have urged consumers to conserve electricity to avoid power outages. Simultaneously, heat waves have gripped Europe. The record temperatures in July have had a dramatic effect on Europe's water resources.While many lakes and rivers are at record lows, scanty rainfall has also had a severe impact on the country's agriculture.

Meanwhile, sidestepping the Bush administration, California has joined hands with the uk to fight global warming. On July 31, leaders of the two governments signed an agreement to become partners in addressing climate change and promoting new clean-fuel technologies. The two leaders said that they recognise the immediate need to reduce greenhouse gas emissions and ease the adverse consequences of climate change.