Global resentment brews as Japan plans to ferry a new consignment of radioactive waste across maritime boundaries, flattening the latest perceptions and innovations of safety 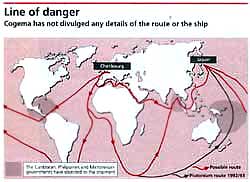 JAPAN has yet again managed to, controversially speaking, outstrip the sun. It kicked off a worldwide furore in December 1992 when it received its first radioactive nuclear waste shipment in the form of reclaimed plutonium from the French company, Cogema. Now, another shipload of the stuff of nightmares is ready for dispatch from the French port of Cherbourg. The protests against the shipment have assumed tsunami-like proportions.

The cargo, slated to leave Cherbourg sometime in February, will consist of about 11 tonnes of high-level radioactive waste left after extracting plutonium from Japanese spent fuel. Thirty more tonnes are expected to follow from other reprocessing plants like Sellafield in Cumbria, run by the British Nuclear Fuel Limited (BNFL). Already, several countries have registered their strong objections to these "cargos of death" entering their waters.

The Caribbean, Philippine and Micronesian governments were among the first countries to register their protest. Owen Arthur, prime minister of Barbados and chairperson of the Caribbean Community, has stated categorically that he will block Japanese cargo entry and the Philippines followed suit. Meanwhile, us politicians and us territories have called on President Bill Clinton to force the postponing of the shipment until doubts about its safety are resolved.

Tension has been mounting in the anti-cargo camp ever since the publication in early January of a report, commissioned jointly by the environmental group, Greenpeace International, the Nuclear Control Institute in London and the Tokyo-based Citizens' Nuclear Information Centre, and written by Edwin Lyman, a physicist at Pricetown University. Lyman suggests that the waste's packaging may be defective: it is subject to rupturing and massive radiation release on a scale far worse than Chernobyl. The waste, as he describes it, is mixed with glass and poured into 5 mm-thick stainless steel cylinders, which are welded shut. For the voyage, 27 cylinders will be placed in a container weighing 112 tonnes and emitting 40 kilowatts of heat. He warns that a prolonged oil fire burning at more than 1,000 degrees C could make the glass expand, bursting open the cylinders.

Terrified by the chilling details, 2 us Congress members from Hawaii and representatives from Guam, American Samoa, the Virgin Islands and Puerto Rico urged President Clinton to halt the shipment. The protestors argue that because the Japanese fuel was supplied by the us, intervention is not only possible, it is desirable. Politicians from Jersey and Guernsey have expressed their concern to the European Community (EC) in Brussels, urging the new ec transport commissioner, Neil Kinnock, to block the shipment by invoking community rules on transboundary movement of nuclear wastes.

Greenpeace International is warming up the front ranks in this battle. Belligerent activists have already stationed themselves at the Cherbourg port and painted a giant "nuclear dustbin" on the body of the ship that carried the killer cargo to Japan in December 1992. "What is irking us most is that the entire operation is shrouded in mystery. Till now, Cogema has not divulged the details of the plans to transport the cargo -- the ship that will carry it, or the route that it proposes to take," says Karen Richardson, Greenpeace activist in London, who is coordinating the campaign. She believes that the cargo will take the shortest route, the Panama Canal. And she is confident that Japan can yet be thwarted. "We can do it by putting political pressure on Japan. Public opinion has to be mobilised at a global scale, and till now, the response has been very encouraging," she says.

Japan, however, is not budging from its policy of using recycled plutonium. In December 1994, at a meeting to set the 1995 budget allocations for the Science and Technology Agency, the new Social Democratic Party government, which had hitherto prided itself as the champion of the anti-nuclear movement, suddenly did a back flip and accepted the opposition's demand for more funds for recycled plutonium.

Japan is being egged on by leading reprocessing companies. While the BNFL has dismissed Lyman's report as "dubious science", Jean-Louis Ricaud, director, Cogema, shook it off as having "no technical or scientific value".

Greenpeace expressed its disgust at these "glib responses". "If these companies are so cocksure about their safety arrangements, why are they stubbornly refusing to discuss the issue with Lyman?" asks Karen, "He has been camping in London to hold a dialogue with the BNFL and Cogema officials, but he is being deliberately blocked out."