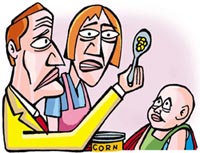 Panic waves swept across the island nation when it was learnt that a consignment of contaminated corn from China had found its way into various food products. The corn, which contained more than 100 times the safe level of lead, was imported in October. It was then milled before being used in products such as baby foods, soups, batters and baking goods. The contamination was discovered when the New Zealand Food Safety Authority (nzfsa) tested the infant formula as part of its Total Diet Survey, carried out once every five years. Authority director of imported and domestic food, Tim Knox said the authority concentrated on inspecting foods it considered high risk. Corn was not among those foods. The nzfsa claims that the health risk for anyone who has consumed food from the affected batches is extremely low.

But not everyone is satisfied with these explanations. Green mp Sue Kedgley accused the authority of being lax and demanded a public inquiry. Kedgley has also drawn attention to a scientific study published in the New England Journal of Medicine according to which any lead exposure, whatsoever, can lead to irreversible intellectual impairment in children.