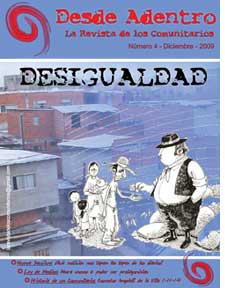 Tired of the mainstream media describing their neighbourhood as a hotbed of crime, a group of people from one of Buenos Aires’ largest slums have brought out a magazine aimed at breaking down the stereotype. The weekly Desde Adentro (From the Inside) focusses on youth, education, health and housing problems in Villa 1-11-14, home to 60,000 people.

Most of the slum’s residents are immigrants from neighbouring Bolivia, Peru and Paraguay. “The magazine has a print run of 3,000, We get together on Saturdays and debate things, whatever emerges gets written down,” Agustín Garone, one of the editors said.

One of the magazine’s sections is ‘El escrache’. It means outsiders in Spanish but in Argentina it is often used for hecklers. “The section carries our response to specific media coverage,” Garone said. One of the issues denounced the award winning America TV’s report La favela Argentina where reporter Facundo Pastor said for a football game with Villa kids he had to don a bullet-proof vest.