The incendiary Sardar Sarovar Dam project came to a head on March 15 this year, when Narmada Bachao Andolan (NBA) agitators, led by the redoubtable Medha Patkar, demonstrated in front of the ministry of environment and forests, asking the government to open the construction sluices that had been slyly closed three weeks ago. In the shadow of the dam, the two Congress state governments of Gujarat and Madhya Pradesh are wrestling out the issue of whether the dam's height ought to be reduced or not. The capricious realpolitiks of the issue often tends to smother the real one -- that, in the final analysis, the dam's worth lies in what it can do to, and for, the people and the environment, not in which chief minister's job it can help keep. 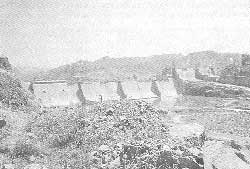 The battle to raise hopes and lower the heightTHIS is the kind of demagoguery that haunts the Sardar Sarovar Project. The late Gujarat Chief Minister, Chimanbhai Patel, had used the emotive words jeevan dori (lifeline) to cement the project on an emotional platform from which, with infinite political cunning, it refuses to descend to the level of reason.

What would descend if Madhya Pradesh were to have its way is the height of the dam, from 455 ft to 436 ft. The MP government says that the reduction would prevent the displacement of 38,000 of its people and the submergence of 10,125 ha of land.

But even though it is racked with political friction, the Gujarat government unanimously favours the status quo. Interim chief minister Chhabildas Mehta told the Vidhan Sabha in Gandhinagar on March 7, "Our stand is on the SSP issue is irrevocable."

MP chief minister Digvijay Singh says that the controversial reduction in height "does not reduce the availability of water". In a letter to the Prime Minister on March 4, Singh emphasised his stand: "The level of 436 ft has been worked out by the Narmada Water Disputes Tribunal. At this level Gujarat and Rajasthan would get their full allocated share of water (Gujarat-1.11 million ha metre (mhm), Rajasthan- 0.617 mhm)."

He also says that according to a World Bank Independent Review, the percentage of power loss due to the 19 ft reduction would be between 10 and 12 per cent, but that he is willing to settle for a decrease in his state's share of 57 per cent to compensate for any loss in Gujarat's 16 per cent. He said that lowering the dam height would improve the "environmental profile of the SSP", which has been knocked rather often.

For a moment, it seemed that unanimity against Madhya Pradesh had forced the Congress intra-party confrontation within the Gujarat government off the immediate agenda. Chimanbhai Patel's widow and Rajya Sabha member Urmilaben Patel iterated even at the solemn moment of his ash immersion ceremony on March 1 at the dam site in Kewadia village that work at the dam would continue unhindered. The issue has brought support from former state chief minister Amarsinh Chaudhry and state Congress president Prabodh Rawal. State minister for Narmada affairs and former chief minister Babubhai Jashbhai Patel says, "This question (of height reduction) cannot be opened for 45 years. The tribunal award is binding upon all the states concerned -- Gujarat, Madhya Pradesh, Maharashtra and Rajasthan -- and on the Central government and on all parties. Discussions were held for 10 years, and the award was as good as the Supreme Court is for law."

But Singh is not looking, as the Gujarat government is, at the letter of the law: he is clearly anxious about the fact that the state is running out of land for resettlement and rehabilitation, which is why it has not drawn up concrete plans as yet. Says Vinod Raina, director of Eklavya, a Bhopal-based NGO, "In fact, none of the four governments have any hope of rehabilitating the displaced population at the planned dam height of 455 ft. In MP, they would have to release forest lands to rehabilitate the people."

The issue has even created a ripple in the Bharatiya Janata Party, the principal opposition party, with the unit in Gujarat supporting the state Congress government. BJP spokesperson Sushma Swaraj has made it clear that the party "does not seek a lowering of the height of the dam", and that "the forthcoming elections in Gujarat (in early 1995) will be kept in mind while taking any decision on the SSP".

Says S C Sharma, BJP member of Parliament from Bhopal and former chief secretary of Madhya Pradesh, "If they allow height reduction even once, it will open up a Pandora's box. Other people in the submergence area will demand further reduction in height. On the one hand, the state government is trying to reduce the dam height as a populist measure; on the other, it is spending huge amounts to contain the dam agitationists."

Meanwhile, the Congress government in New Delhi seems to be unsure about its own position. Singh has environment minister Kamal Nath and minister of state for agriculture Arvind Netam backing him to the hilt. Kamal Nath has even threatened to withdraw environmental clearance for the project if the work on the rehabilitation of oustees and treatment of the catchment area break the stipulations. But Union water resources minister Vidya Charan Shukla asserts, "The position of the government is unchanged. The Tribunal award has been accepted and will continue to be accepted."

But most people are sitting on the fence, apprehensive of botching the early '95 elections. Former MP chief minister Sunderlal Patwa says mysteriously, "We will back Digvijay Singh as long as the reduction in height does not affect the availability of water in Gujarat and power in MP."

Two factors seem to have influenced the MP government's unilateral decision: the death of Chimanbhai Patel, who, as Babubhai Patel explains, had "maintained good relations with the governments of MP, Maharashtra and Rajasthan, and could persuade them to be helpful".

The second is ostensibly the politically astute and powerful landed peasantry lobby in Madhya Pradesh. On his own, Singh asserts that it "is crucial to save rich cultivable land". Opposition members see his move as an attempt to dislodge the BJP in the submergence area. Says Varma, BJP Member of Parliament from Bhopal and former chief secretary of the state, "The Congress was able to grab all the assembly seats except Barwani in the submergence area. Sing's announcement follows his promises to Baba Amte before the election."

A senior official of the Planning Commission says that controlled irrigation -- which is where the dam's height comes in -- would lead to a functional reduction of water during the dry season. And with the BJP breathing down its neck in Gujarat, the state Congress cannot afford to even seriously consider this issue.

Medha Patkar of the NBA has taken the position that the height controversy is only an issue within an issue, designed to cloak the agitationists' demand of an immediate stoppage of construction on the dam site. In a statement she released on March 4, she said that "the MP leadership should not arbitrarily talk about the mere height of the SSP. They should consider whether other projects like Narmada Sagar, Omkareshwar and Maheshwar, too, are feasible or not. What is the extent of displacement and possibilities of satisfactory resettlement in the changed scenarios? All should be considered in a larger perspective with the valley as a unit of planning."

As matters stand, the ministry of environment and forests responded to the NBA's March 15 demonstration by announcing a four-member fact-finding team to tour the affected areas and "report back urgently". No one, however, expects the issue to be resolved before 1995. A senior Union cabinet minister, seeking anonymity, explains, "Nobody (MP or the Centre) will pursue this matter of lowering the dam's height. No untoward decisions can be taken now which will affect the party's prospects in the elections." So it's back to the logic of the vote bank.