...China experiences both as floods imperil the lives of thousands 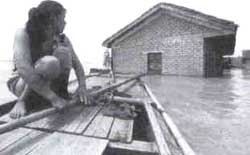 THE Yangtze river is swollen. Since May 1998, floods caused by heavy rains have affected thousands across 12 provinces in central, southern and eastern China. Gushing waters have killed more than 1,200 people, according to reports. Though floods are an annual affair in this part of China, water levels have risen to an all time high along more than half of the river's 6,380-kilometre length. This has caused floods of the like not seen since 1954, when 30,000 people were killed. The International Committee of the Red Cross launched an appeal for US $4.5 million in order to buy rice, wheat, medicines, and water purifying tablets.

Officials say the rate of water flow through China's gargantuan Three Gorges Dam project being constructed upstream of the industrial city of Wuhan to prevent the catastrophic summer floods has been unprecedented in recent days. "It's not that the rate has never been this fast, just that it's never been sustained at the present rate for such a long time before," said the official. Recently, the authorities announced a ban on shipping along the stretch of the Yangtze river.

The Three Gorges Dam may have worsened the situation by contributing to the damage wrought by floods this season, say critics of the dam. Phil Williams, president of the International Rivers Network, an environmental group based in Berkeley, California, said that by lulling residents and officials along the Yangtze into a false sense of security, the Chinese government's exorbitant claims about the dam's future flood control capability may have caused local authorities to neglect maintenance of dykes and other traditional flood-prevention measures along the waterway. "People think what is the point of investing and upgrading the present embankment system if the Three Gorges Dam is going to take care of the problem?" said Williams.

The port of Wuhan, a major industrial city with a population of seven million, has probably been the hardest hit. Floods here have killed about 140 people and damaged property worth about US $10 billion. Flood control officials in Wuhan have launched night long vigils on the city dyke as the Yangtze continues to rise owing to the incessant downpour. Over four million people were mobilised to reinforce the weakened defences that protect the area housing one-third of China's population and accounting for 40 per cent of its industrial and agricultural output.

President Jiang Zemin ordered a "door-die" effort to prevent a repeat of the 1954 catastrophe. Crumbling dykes were patched, sandbags and rocks were used to bolster the banks. Authorities have already started deliberately exploding some dykes to divert water into the countryside after the third huge crest in a month ripped past Wuhan threatening the city of Jiujiang and the nearby Hong Kong-Beijing railway line, reported the official Xinhua press agency. In Xiannning in the central province of Hubei " 11 small dykes were dynamited to divert floodwaters and lower the water level in the main stream of the Yangtze river", Xinhua said.

"The People's Liberation Army has issued emergency orders instructing all officers and soldiers to fight to the death to protect Yangtze river dykes, major cities and the well being and property of local people," Xinhua reported. Downpours mixed with spells of bright hot sunlight, which could drive temperatures beyond 35C, worsened the plight of many of the 30,000 people living in plastic and bamboo tents on dykes in the Dongting area, said Arne Jacobson, an official with the Red Cross.

"In the areas where people have been for a long time there was a lot of despair and resignation about the situation and you could really feel the people were desperate," Jacobson stated. Many people have been stranded on narrow patches of high ground for up to 45 days, exhausting meagre supplies salvaged from their wrecked homes and lowering their resistance to disease, he pointed out. He added that though Chinese physicians had managed to stave off epidemics by giving out water purifying tablets and vaccines, stockpiles of medicines were fast running out.