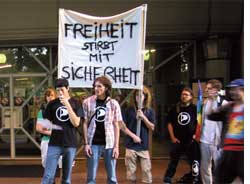 The Pirate Party -- which won a surprise seat in the European Parliament in Sweden in May -- now has a UK chapter. The party, which campaigns to legalize non-commercial internet file-sharing and has branches in 25 European countries plans to contest the next general election in the UK.

It gained more than seven per cent of the vote in Sweden on the back of publicity over the trial of the founders of Pirate Bay, a well-known file-sharing site.

The party is campaigning against proposals of the recent Digital Britain report. The plans, which could form future government policy, include asking internet service providers to release identities of serial infringers making it easier for music and film companies to sue them.