A new venture makes a foray into the world herbal market 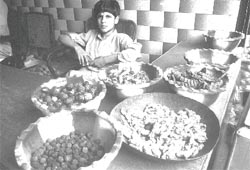 for more than half a century, the National Botanical Research Institute ( nbri ) in Lucknow has been doing pioneering work in the collection, study and conservation of the vast and varied floral diversity of India. With the entry of P Pushpangadan as its director, the institute is at the threshold of yet another significant venture: the production of herbal products for the world market. And this they hope to achieve by involving the participation of the rural communities.

Pushpangadan, former director of the Tropical Botanical and Garden Research Institute ( tbgri ) in Thiruvananthapuram, was instrumental in transporting a tribal medicine to treat stress from the depths of Kerala's rainforests to the medical stores of the world. The wonder drug, Arogyapacha, brought laurels for tbgri in 1998 and also set a precedent whereby for the first time in the world an indigenous community -- the Kani tribe -- was given the intellectual rights over a medicine, thus ensuring a steady source of income. All this was possible because of the dogged efforts of Pushpangadan who initiated the whole process of discovery, patenting and marketing. With the firm belief that India can become a world leader in the manufacture of herbal products, Pushpangadan has now set out to replicate the experiment with more commonly known traditional herbal formulations. This time on a much larger scale and with the aim to create a niche in the world herbal market.

According to Pushpangadan, "There has been a revival of interest in plant-based products all over the world and companies are going all out to tap the vast potential of this ever growing market. However, India, which has a centuries-old tradition of using plants for effectively treating diseases and as dietary supplements and can easily become the leader, has not even made a foray into the arena."

The first step taken by Pushpangadan was to establish the ethnopharmacology division with a mandate to develop plant-based products scientifically validated and of an international standard. Within its first year of operation the lab introduced herbal gulal (Holi colours) on an experimental level. The technique involved drying flowers while at the same time retaining their colour.

For the next Holi, nbri plans to introduce flower pellets that dissolve in the water to give a bright colourful hue. And instead of selling it to any commercial unit, nbri is planning to transfer the technology to some village-based entrepreneurs. Already nbri has received several enquiries from interested manufacturers. Several other products, including lipsticks based on aroma therapy (perfumes that treat different mood changes) and herbal drinks that double up as diuretics, are under development.

However, the most important part of the research at nbri is the development of 'Nutraceuticals' or dietary supplements that prevent disease. "Most of the vegetables and fruits that are traditionally eaten in India have inherent disease preventive and health promoting properties. It is from there that the concept of nutraceuticals has emerged," says Pushpangadan.