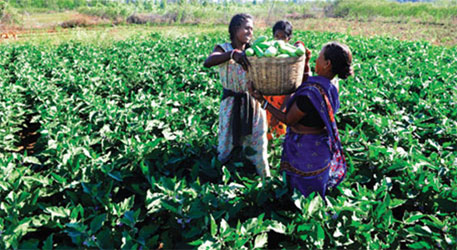 The global hunger index (GHI) report released this week has pointed to the widespread problem of hidden hunger (micronutrient deficiencies) even as many developing countries have managed to reduce hunger levels in absolute numbers.

The report, released by Washington-based global non-profit International Food Policy Research Institute along with Welthungerhilfe and Concern Worldwide, points out that a staggering 2 billion people in the world or one in three people are deprived of essential vitamins and minerals, which “weakens immune system stunts physical and intellectual growth, and can lead to death”. Hidden hunger also perpetuates the cycle of poverty, poor nutrition, lost productivity and poor economic growth, says the report.

The GHI report follows close on the heels of  the FAO report, State of Food Insecurity in the World (SOFI 2014), that said one in every nine persons (total of 805 million people) in the world still goes hungry.

While absolute hunger has decreased, people who have enough calories suffer from nutrient deficiency and their number is more than double that of people who do not get enough food. “Particularly in countries facing a high burden of malnutrition, hidden hunger goes hand in hand with other forms of malnutrition and cannot be addressed in isolation,” said Welthungerhilfe president Bärbel Dieckmann, in his press statement.

Micronutrient deficiencies cause an estimated 1.1 million of the 3.1 million deaths related to under-nutrition that take place every year, says the GHI report, quoting another study. 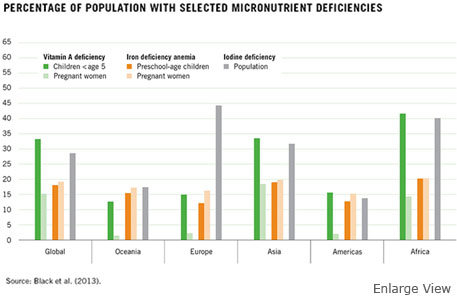 Hidden hunger, as the graph shows, is the highest in sub-Saharan Africa and South Asia.

The report also points to the complexities of hidden hunger in developing countries as they move from traditional diets to highly processed foods which are energy-dense and poor in micronutrients. This is giving rise to obesity and diseases as well. Developing countries are facing the “triple burden” of malnutrition, undernutrition and micronutrient deficiencies.

The most common source of hidden hunger, according to the report, is diets based on staple crops, such as maize, wheat and rice, which are rich in carbohydrates but low on micronutrients. Poverty is a major factor that hampers access to nutritious diets like poultry, fruits and vegetables, says the report. 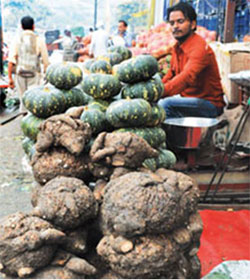 To combat hidden hunger, the report has suggested enabling the production of diverse crops and ensuring the availability nutrient-rich foods, including fruits and vegetables.

The report has recommended dietary diversity as the most effective way of preventing hidden hunger, which entails a return to the traditional foods and fruits and vegetables sourced from kitchen gardens, which people in developing economies are abandoning.

A variety of cereals, legumes, fruits, vegetables, and animal-source foods provides adequate nutrition for most people, although certain populations, such as pregnant women, may need supplements, says the report, quoting FAO. In short, it reiterates the need for protecting local food biodiversity.

The report also points to threats to traditional diets in rural areas of India, which included all types of millets, pulses, oilseeds and local seasonal vegetables and fruits.  These are disappearing from the plates and are being increasingly replaced by government-subsidised rice and wheat, supplied through public distribution system (PDS).

A garden in a sack: Experiences in Kibera, Nairobi