The 20th century has taught us one thing. Use natural resources in a sustainable way or perish 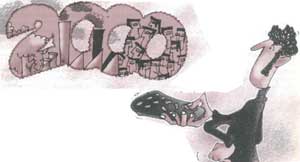 The arrival of the 21st century is clouded by unprecedented threats to the stability of the natural world. This was stated in the special millennial edition of the State of the World report, released by the Washington-based Worldwatch Institute. "In a globally interconnected economy, rapid deforestation, falling water tables, and accelerating climate change could undermine economies around the world," say Lester Brown and Christopher Flavin, lead authors of the new report. During the past century, world population grew by more than four billion - three times the number of people when the century began. What is alarming is that at the same time, the use of energy and raw materials grew more than 10 times.

The authors say there are many problems that have to be addressed. World energy needs are projected to double in the next several decades, but no credible geologist foresees a doubling of world oil production. While protein demands are projected to also double in the century ahead, no marine biologist expects the oceanic fish catch, which has plateaued over the last decade, to double. Growing stress can also be seen in the world's woodlands, where the clearing of tropical forests has contributed to unprecedented fires. The atmosphere is also under assault. The billions of tons of carbon that have been released since the Industrial Revolution have pushed atmospheric concentrations of carbon dioxide to their highest level in 160,000 years. The latest jump in 1998 left the global temperature at its highest level since record keeping began in the mid-19th century. "Satisfying the projected need of 8 billion or more people with the economy we now have is simply not possible. The western industrial model - the fossil-fuel-based, automobile- centred, throw away economy that has raised living standards in this century - is in trouble," stated Brown.

Having recognised the mistakes and the cost which human kind has had to bear, Brown and Flavin say broad outlines of a sustainable economic system are beginning to emerge. The foundation of such a system is a new design principle - one that shifts from the one-time depletion of natural resources to an economy that is based on renewable energy. A sustainable economy will be a solar-powered, bicycle/rail-based, reuse/recycle economy.

"One question facing humanity as the new century approaches is whether we can find a new understanding and values that will support a restructuring of the global economy," said author Christopher Flavin. "The end-of-the-century offers hope. The 19th century was marked by the abolition of slavery and the 20th century by a new international principle of human rights (adopted by the United Nations in 1948). Similarly, the 21st century will require a new ethic of sustainability that includes the need to live within our ecological means. We will need a new, set of human responsibilities to go with our new found human rights," say Brown and Flavin.