In a setback to the Mamata Banerjee-led Trinamool Congress government in West Bengal, a division bench of the Calcutta High Court struck down the “Singur Land Rehabilitation and Development Act of 2011”, terming it unconstitutional and void. The law was enacted in 2011 to vest farm land acquired by the previous government for Tata Motors’ Nano small car factory in Singur in Hooghly district, about 40 km from the state capital of Kolkata. Vesting of the farm land leased to Tata Motors would have enabled the state government to return 400 acres (162 ha) of land to farmers who had expressed unwillingness to give up their land.

The earlier left government of West Bengal had acquired 403.5 ha of farm land for Tata’s cheapest Indian car factory in 2007. Of the 13,000 farmers who parted with their land, 2,000 didn’t take any compensation and wanted their land back. Trinamool Congress has been demanding that 400 acres of land be returned to these “unwilling” farmers—those who had to part with their land and did not accept any compensation.

Tata Motors shifted the project to Gujarat in 2008 after the political situation in Bengal turned volatile. The Trinamool Congress government stormed to power on the plank of poriborton (change) in May 2011, throwing out the 34 year old left regime—Singur and Nandigram land agitations being the major flash points in the run up to the Assembly elections. While none of the projects materialised, the chief minister declared her government would not acquire land for industry and companies will have to arrange land on their own. 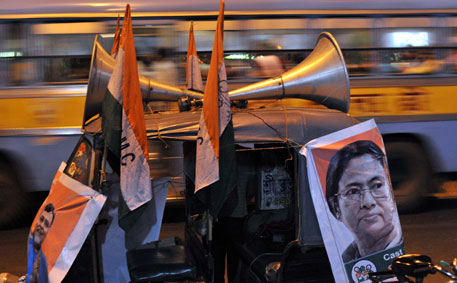 In May 2012, on the first anniversary of her government, the chief minister declared Rs 1,000 per month compensation for the “unwilling” farmers of Singur along with subsidised rice at Rs 2 a kg.

After the Singur Act came into force, Tata Motors filed a petition in the Calcutta High Court. The company claims it has invested Rs 1,500 crore in Singur and cannot part with the land. When a single bench of the Calcutta High Court upheld the Act in September 2011, Tata Motors filed an appeal. The division bench ruling on the appeal states that no presidential assent was taken for the Act, and that therefore, it is constitutionally invalid. The verdict may spell trouble for the West Bengal chief minister who may find it difficult to obtain presidential assent. The verdict comes at a time when political parties are bickering over who the next president should be, and Mamata Banerjee, a UPA ally, has refused to endorse the nomination of Congress candidate Pranab Mukherjee, the front runner for the president's post.

State to appeal to apex court

Soon after the verdict, Mamata Banerjee told media persons, “the state government is committed to returning the land to 'unwilling' farmers. In the end, they will emerge victorious.” State counsel Kalyan Banerjee said the government will challenge the verdict in the Supreme Court of India. The high court also ruled that the judgement will remain “suspended” for two months, allowing the state government to file an appeal. However, during this time the state cannot take over the land.

Leader of the opposition in the Bengal Assembly, Surya Kanta Mishra of the CPI(M) told reporters, “our party’s stand was that the Act was unconstitutional. Mamata Banerjee never sought our opinion and the high court order vindicates our position.”
“The cause of the Singur farmers is entirely justified,” says Kolkata based rights activist Anuradha Talwar. “The protests against acquiring  fertile agricultural land for industry in Singur was a shot in the arm for land struggles across the country. This verdict will prolong the suffering of farmers. The state government should not have enacted the law in haste,” she adds.

“I have no comments to offer on Singur verdict. Throughout my life, I have struggled for the cause of the farmers, working class, poor and under-privileged. Our commitment to be with them will remain, whether I am in power or not. I will continue to fight for this cause. Finally, the people’s choice in democracy will prevail,” the chief minister wrote on her newly opened Facebook page. Tata Motors welcomed the verdict and said the company will study the order before deciding on the next course of action.

Incidentally, the chief minister has been receiving flak for her government’s role in recent evictions in Nonadanga slum area and street hawkers in Kolkata. Several intellectuals, once part of the poriborton brigade has parted ways with her year old government. They include noted author and activist Mahashweta Devi, Trinamool’s dissident MP Kabir Suman and actor Kaushik Sen, among others.