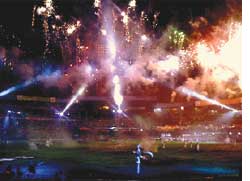 Activists are up in arms against a Calcutta High Court order allowing Kolkata Knight Riders, one of the teams competing in the ipl cricket matches, to use microphones during T-20 cricket matches at the Eden Garden stadium.

The court allowed the cricket team, co-owned by actor Shahrukh Khan, to use microphones and burst crackers within 90 decibel limit saying there are no residential areas near Eden Garden. SPCB officials said this was not true as the city does not have exclusive residential zones; most localities have mixed use.

The stay order not only overturns the 1996 high court ban but also ignores the recently revised central norms on noise pollution that prescribe a 55 dB limit during daytime and a 45 dB limit at night in residential areas, said a senior official of SPCB. “We will file a petition by March-end asking the high court to clarify its order,” said Biswajit Mukherjee, chief law officer of the SPCB.

Political parties are the first in the queue. “If rules can be relaxed for cricket matches, why are we stopped from holding political rallies,” asked Binoy Konar, a cpi(m) leader.