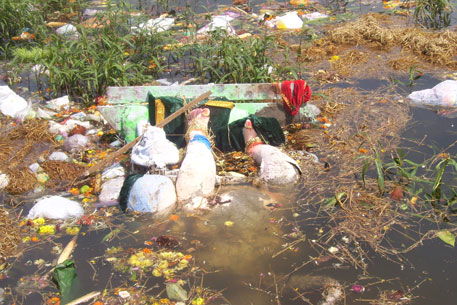 The Nagpur Municipal Corporation's efforts to prevent pollution in the city’s lakes, caused by immersion of Ganesha idols made of plaster of Paris (POP) in them, has received a setback. On September 5, the Nagpur bench of the Bombay High Court banned the seizure of such idols. The court chided NMC for failing to impose the ban at the proper time, and ordered that idols that have already been brought into the city and those being made in the city itself not be seized. However, the court has permitted NMC to seize POP idols at octroi posts.

The long-standing demand for a ban on POP Ganesha idols, which find their way into the city’s lakes in thousands at the end of the highly popular ten-day Ganesh Chaturthi festival and cause pollution, was finally accepted this year by the NMC. However, the ban came into force only on August 30, just 20 days ahead of the festival, when a large number of idols had already been made in the city or imported from outside.

The court order came following a petition by idol dealer Vinod Gupta, which argued that as many as 85 to 90 per cent of the 350,000 idols sold in the city annually are made of POP, and an abrupt ban could create a huge shortfall of idols in the market and create a law and order problem. The petition also questioned NMC’s locus standi in imposing the ban after it has already recovered Rs 3.04 crore worth of octroi on idols, and demanded that NMC lift its ban till Anant Chaturdashi, the last day of the festival, which falls on September 29 this year.

The court expressed its displeasure over the fact that NMC had neglected the problem for a whole year, and did not frame any rules and regulations in this regard. An attempt to ban POP idols had been made by the NMC last year, which fizzled out after traders were granted permission to sell their existing stocks of idols to prevent losses. However, since then, till August 28 this year, NMC did not take a single step to make the ban effective.

The court, however, has ordered idol dealers not to market POP idols till the next hearing of the petition on September 10. The civic body has been ordered to file its reply to the petition by the same date.