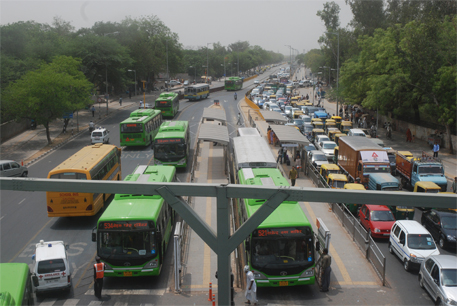 Restoring sanity amid chaos, a division bench of the Delhi Court has issued an interim order in the ongoing public interest litigation relating to the Delhi BRT road corridor on Tuesday. It has issued an interim order, stating: “till the time the writ petition is decided, the traffic flow would revert to its movement/flow as per the BRT corridor traffic flow system to restore the BRT corridor… by September 15”. Thus, the bench comprising Justice Pradeep Nandrajog and Justice Manmohan Singh, practically set aside the earlier interim order of the high court that had allowed other vehicles to ply on the dedicated bus corridor.

The new order has taken on record the assurance given by K T S Tulsi, the government counsel, that necessary signages would be put in place and wide publicity would be given for the revised traffic flow management and that the traffic marshals would be brought back and adequate number of traffic police personnel would be stationed, at least for the first few days, lest chaos take over the BRT corridor. This will be implemented along with the changes in the signalling pattern to permit cars and buses to move in the right direction at the intersections. Traffic police and marshals will ensure cars which have to take a turn towards the right keep towards the right side of their road segment.

The high court was hearing a petition filed by NGO Nyay Bhoomi, demanding smooth traffic movement and to opening up of the reserved lanes for buses to other vehicles. In fact, the bench has directed the petitioner to submit the “sequential logic” and rationale for demanding scrapping/modification of BRT. The bench observed that public interest petitions are filed for the larger public good.

The court has upheld BRT as a good concept and a solution to the growing car mania and congestion in the city. “If the city decides to buy cars, buy cars, buy cars and buy more cars… a day will come when nothing will move. Should planners allow that to happen?” asked the division bench. Good planners have seen where the city is destined to go and are taking remedial measures when there is time. Justice Nandrajog likened the situation to a spoilt child who might in the future accuse his own parents for not curing him or disciplining him when he was being bad. “Swallow the bitter pill now if needed,” said the bench. One generation will have to sacrifice for the good of the others. This will require attitudinal change, they said.

The bench has made it clear that it is important to find a mechanism to remove the problem and save BRT. The concept is not bad and there is no defect in design, but sudden surge of traffic in the middle of the stretch brings a bad name to the entire project. The focus of the discussion was on the remedial measures for the 900 metre stretch near Chirag Dilli that has become a traffic bottleneck. Some of these remedial measures include modification in the traffic signal cycle, aligning movement of right turning buses and other motorised vehicles and a parallel road to take traffic directly from Saket to outer ring road.

The report of the Central Road research Institute (CRRI) on the BRT corridor was under close scrutiny. The bench used its data to demonstrate how the current BRT has actually delivered on its own objectives of carrying more people. More than half of the commuters travelling on this corridor use buses. Moreover, bus ridership has increased. But more important as the bench has observed, half of those who have opted out of autos and taxis on this corridor because of congestion have opted for BRT. This is a powerful indicator of BRT’s impact as the users of autos and taxis are rich.

The argument put forth by CRRI and Nyay Bhoomi that during the trial run speed of the cars had increased by 18 per cent was trashed by the court. The bench observed, this is like saying if the speed has increased from 1 per cent to 2 per cent it is a jump of 100 per cent. In fact, the bench concluded that having BRT or not, makes marginal difference to the car users.

The hearing has outlined the problem clearly with a powerful message at this crucial time when the Delhi has to decide its future mobility options. Car numbers will grow with economic growth. But it is important to decide the sustainability indicators today. Can everyone have car and use it too, asked the bench. Already congestion is leading to road rage, causing perversion in society, and insanity is setting in.