'High GDP states have grown at the cost of the environment'

An analysis of 28 states in India indicates that regions or states contributing most towards economic growth are doing so at the cost of the the environment. The comparitive analysis of Indian states was released this week by Chennai-based think tank, Centre for Development Finance. The report, Environmental Sustainability Index (ESI) for Indian States-2011, aims to capture both historical resource endowments and achievements of policies and strategies undertaken by various stakeholders in conserving natural resources.

The report has categorised Himachal Pradesh and north-eastern states like Sikkim, Arunachal Pradesh, Mizoram, Manipur and Meghalaya as most sustainable from the point of view of environmental protection. But large states like Gujarat, Punjab and Uttar Pradesh that have witnessed intensification of industrial and agrarian activities have done so at the expense of environmental health and have scored low on the ESI, states the study.

Even among the states endowed with natural resources, Jharkhand and Madhya Pradesh score very low, and Chattisgarh and Odisha score moderately in terms of preserving natural resources. On the other hand, Arunachal Pradesh, Sikkim or Meghalaya, which are well-endowed by nature, have preserved their natural resources, says the analysis. Other resource-rich states, such as Jharkhand and Madhya Pradesh have been put in the less sustainable category and Bihar is in the least sustainable category, states the report (see table). 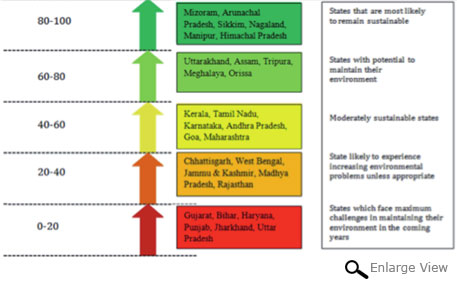 Response from government agencies and stakeholders to policies relating to environmental safety has shown that states with higher per capita income are more responsive towards shifts in policies. The report also identifies some exceptions. There are exceptions here: Arunachal Pradesh, which has shown stronger response despite being a low income state, and Punjab, which is high income, but scores low on responsiveness due to less budgetary allocation, states the report.

The performance of the states on the environmental sustainability index has been evaluated against indicators classified into four different heads: first, human activities of production, consumption and distribution that exert pressures on the environment; second, state of air quality, water quality, land use and agriculture, forests and biodiversity; third, measures of the impact of the current state of the environment and resource extraction on ecosystem and human health; and fourth, policy responses and society's efforts to preserve the environment. ESI is constructed as a composite index from 41 key environmental indicators.