A study traces the trajectory of Lantana in the country 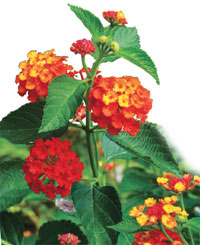 LANTANA is one of the 10 worst weeds in the world. It originated in the Americas but can now be found across more than 60 countries. Biological attributes like fire tolerance and ability to survive in any condition make it a nightmare for forest managers. The weed occupies over 13 million hectares in India and continues to spread. A study, published in Biological Invasions on December 6, reconstructs the history of Lantana introduction and spread in the country.

Using archival information from various gazetteers published in between 1885 and 1950 and interviews with tribal people and retired forest officials, the researchers have shown the weed was introduced in the country as a hedge plant by the East India Company. It was planted in Pachmarhi, Nilgiris, Shillong, Chamba, Delhi and botanical gardens in Darjeeling, Pune, Saharanpure, Bengaluru and Udagamandalam.

“Contrary to the belief that Lantana species were transported from South America, my study suggests they might have been transported to India from the European botanical gardens by colonial officers during the 1690s,” says lead author Ramesh Kannan, a researcher at the department of environmental studies at the Rhodes University in South Africa. The researchers recreated the path of Lantana spread in the country by analysing the patterns of its occurrence and distribution at a national scale and then at a local scale in the Western Ghats. They found the weed was well established in southern Western Ghats by the 1950s. In Coorg, a whopping 284 sq km was under its infestation by the 1900s and it was included under the Coorg Agricultural Pests and Diseases Act in 1933. The central and northern parts of the Western Ghats, however, came under its grip only in the last 10-15 years.

Using a software called Maxent, the researchers developed a model to predict the spread of Lantana in the region in future. It shows the obnoxious weed might invade more areas in the southern and northern regions of Western Ghats in the coming years.

“All efforts at eradicating Lantana since the 1980s have failed. We should shift our focus towards managing it through holistic measures instead of conventional measures,” says Shonil Bhagwat, a scientist at the School of Geography and Environment of the University of Oxford.