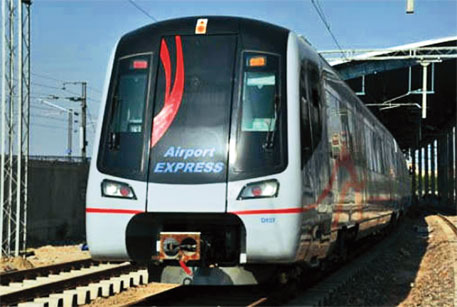 THE 23-kilometre hi-tech Delhi airport metro express line, which promised a dream run of 120 km per hour, came to a halt on July 8. Its two partners—Reliance Infra and Delhi Metro Rail Corporation (DMRC)—are locked in an acrimonious blame game. Amid complaints of unsafe structure, Reliance Infra is now suspected to be keen to quit the deal.

The airport line was closed because of cracks in the girders, the iron beams that support the tracks; dislocated bearings, that support the train; defective tracks and water seepage in tunnels. When the Ministry of Railways said the metro rail could run at 40 km per hour, Reliance Infra raised the alarm over passengers’ safety. The Rs 5,800 crore public transport, which was the first air-road link in the capital, closed within just 18 months of operations for an indefinite period. With that, the first step towards public private partnership (PPP) in metro construction and operations faltered. The only other is the Mumbai metro line.

Immediately after the closure, a joint inspection was held by DMRC, Research Design and Standards Organisation of the Indian Railways, architectural firm Systra and Delhi Airport Metro Express Private Line (DAMEPL). DAMEPL is the subsidiary owned by Reliance and CAF-Spain, with 95 per cent and five per cent stakes respectively. The team found problems in the track fastening system—91 per cent of the bearings were dislocated. Of this, 81 per cent were placed on defective grouts on the tracks. Grouts are cement fillings in gaps between two concrete blocks.

The problem could be bigger and needs a more detailed examination, states the inspection report. S K Lohia, officer on special duty for the Ministry of Urban Development, says the bearings should last 15 years.

Reliance Infra, in turn, claims it repeatedly expressed concern over passengers’ safety but DMRC insisted that the trains could run at slow speed. A Reliance Infra spokesperson says this was against the brand image of airport metro line.

Akhileshwar Sahay, strategic adviser of DMRC, argues that defects have appeared many a time on the structures of metro lines, but it was never hyped so much. The issues were resolved within the organisation as there was no partnership. “Water seepages occur in tunnels in all metro systems and it is drained out immediately,” says Sahay. “But this time an accusation has been made. This shows that Reliance has no expertise on the issue.”

DMRC has assured it will repair the defects and has engaged contractors and design consultants like Systra for the purpose. DAMEPL may inspect the line in October and start operations by November. But there is no deadline. The mega buck public transport project has become a victim of technical oversight and supervision.

DMRC officials fear that Reliance Infra is using the current mess as a means to exit the partnership or reduce its liability. The doubt surfaced when Reliance Infra transferred 65 per cent of its stake in DAMEPL to the associate companies of Anil Dhirubhia Ambani Group in August this year.

Unable to trust this equity restructuring, DMRC officials issued notices to DAMEPL demanding explanation why Reliance Infra did not consult them before diluting their stake. DMRC considers this violation of the concession agreement, which could lead to dilution in their liability. The concession agreement states that the concessionaire can restructure equity only two years after the commencement of the agreement. Reliance Infra maintains it did not violate the agreement as the PPP was signed in March 2008. While the firm has dismissed it as a mere entry in the accounting registers, there is widespread speculation that Reliance Infra is planning an exit from the deal. But Reliance Infra denies such a possibility.

DMRC claims that Reliance Infra started talking about poor civil structure when the corporation refused to defer payment of the concession fee of Rs 51 crore. Reliance Infra had sought deferment citing mounting revenue losses. In April this year, it had conveyed to DMRC that its cash flow was badly affected and needed support from the public sector partner.

It had also demanded compensation from DMRC for the lost earnings for being unable to operate the airport express line during the Commonwealth Games. The metro airport line had missed the first deadline of August 31, 2010, a month before Games. DMRC had failed to handover the metro stations to DAMEPL as work had been slow. The second deadline of September 31, 2010, three days before the Games, was also missed. The airport metro line finally started operations on February 23, 2011. As per the concession agreement, while DMRC must bear the overruns due to delays in completion and handing over of civil works, time and cost overruns due to contractor default must be borne by DAMEPL.

As a concessionaire, DAMEPL is expected to recover its investments through fare box collection, advertisements, lease of commercial spaces built along the rail infrastructure, and from vending machines and retail outlets. “While this may cover three-fourths of the total revenue, one-fourth will come from fare collections,” explains Satish Mishra, director of DAMEPL, in a letter to DMRC.

The premium ticket fare of the airport line is almost 10 times that of the normal metro fare. It is assumed that an air traveller is prepared to pay Rs 100 for a journey that costs much more in a taxi. The track is expensive—Rs 247.82 crore per kilometre as opposed to Rs 175 crore per kilometre for other Delhi metro lines. This indicates that the potential earning is too attractive to be abandoned in a hurry. However, the actual earnings have been low.

Passenger volume has fallen terribly short of the estimated target. In the past 18 months, DAMEPL carried about 6.8 million passengers, an average of 11,111.1 passengers in a day. According to DAMEPL, the ridership has reached about 20,000 passengers a day. But this is a tiny fraction of the expected ridership. Feedback Ventures, consultant for the project, states that 15.5 million passengers are annually expected to ride the metro in the initial years. This would increase to 31.4 million passengers per year by 2020. Infrastructure finance firm IDFC’s PPP wing had predicted that approximately 15.3 million people would annually avail the facility by September 2010.

The forecasts were based on predictions of Airports Authority of India (AAI) which stated that the total number of Delhi airport-bound passengers will increase to about 40 million in 2011-2012. According to the latest AAI figures, Indira Gandhi International airport handled 35.5 million passengers in 2011-2012. AAI predicted that the maximum traffic for airport would originate at the Connaught Place metro station because people from all parts of the city prefer to reach central Delhi to catch the train. This justifies the rail link between New Delhi railway station, which is close to Connaught Place, and the airport. AAI had also expected a heavy rush of tourists and participants during the Commonwealth Games in 2010.

At present, however, only 30 per cent of the passengers access the airport. Clearly, the business model was based on an inflated number of passenger flow. But the poor passenger flow did not push DAMEPL to make efforts to attract ridership. In fact, there is anecdotal data on how people who use this line find it inaccessible and unsafe at nights. Connectivity from the station is also poor. Autorickshaws are not allowed close to the airport.

“The airport metro line is very Terminal 3 centric. If someone wants to access other terminals, it can prove disastrous. Most of the taxis plying between terminals charge a fat sum,” says Sachin Bhardwaj, a frequent flier.

Past experiences with PPP show a poor record of private players. “A study of global experiences in urban rail transit provisioning shows that PPPs have not been very successful,” states the working group’s recommendation on urban transport for the 12th Five Year Plan. Of the 113 cities that have metro rail, only 12 per cent are plying in public private partnership, it states.

DAMEPL has made investments to create total assets worth Rs 2,244.62 crore. This investment was well padded with tax concessions, government grants and land support. For the next 30 years, the PPP time period, it would need another Rs 946 crore on the project’s operations and maintenance. Is exit, therefore, an option? Speculation is rife.

The controversy has raised fears about the reliability of PPP models in big public transport projects. It has also brought out ghosts from the past global experiences with PPP on metro rail (see ‘Painful PPP’). The models have suffered cost overruns and losses despite government support. They have often failed to meet the core objective of increasing passenger volumes. Low ridership, increased operational cost and fare hike lead to their near collapse. The governments, otherwise keen on private capital, end up becoming liable for their debt repayments and also run them.

Without adequate safeguards and regulatory supervision, the core objective of increasing public transport ridership at affordable rates to cut pollution and congestion can get compromised. The airport express line operated for 18 months, but there is still no trustworthy survey on its use. A performance monitoring system has not been put in place. Nor is there a proper technical safety monitoring.

The stakes are high. It is time for Indian cities to draw lessons to shape future PPPs with effective monitoring and safeguards so as not to put high-cost public transport projects at risk.