India's road networking plan, one of the few projects that are progressing ahead of schedule, is flouting a number of environmental guidelines 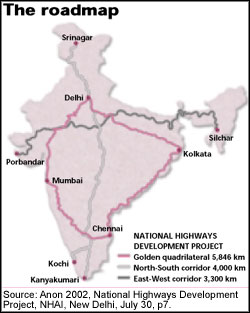 "Speedy development comes at a price," said Prime Minister (pm) Atal Bihari Vajpayee, dedicating the 43-kilometre (km) stretch of the Ahmedabad-Vadodara National Expressway-1 to the nation on January 28, 2003. While the pm was alluding to toll tax collection, experts have pointed out that the Union government's national highway project is actually taking a heavy toll on local ecologies.

Since the pm has evinced personal interest in the ambitious road-networking plan, it is perhaps the only government project that is progressing ahead of schedule. But there are several instances of environmental guidelines either being waived or flouted to facilitate this fast-track implementation: be it on the outskirts of Chennai in Tamil Nadu (tn) or in the interiors of Orissa.

The ongoing schemes aim to connect all habitations in the country by the end of the tenth five-year plan. These include the National Highways Development Project (nhdp), which will link the urban parts, and the Pradhan Mantri Gram Sadak Yojana (pmgsy) for the rural areas. According to the National Highways Authority of India (nhai), mandated to execute the nhdp, "Never before in the history of India has road construction work been undertaken on such a large scale, except by 16th century ruler Sher Shah Suri whose brainchild was the Grand Trunk Road."
Roads are the lifelines of India, with 85 per cent of passengers using them. The country's national highways cover 58,112 km and state highways stretch across 1,37,119 km. Major district roads span 4,70,000 km and rural roads extend over 26,50,000 km. Though national highways form only two per cent of the total network yet they bear over 40 per cent of the total traffic load.

To deal with this constraint, the pm launched various road projects. One such scheme, the nhdp, was flagged off in 1998 (see: The roadmap ). Its objective is to "develop roads of international standards with facilities for uninterrupted flow of traffic". It has two components -- the Golden Quadrilateral (gq) and the North-South & East-West (nsew) corridors. gq would connect the four metros by a 5,846-km road and is to be completed this year, reveals an nhai official. The nsew project comprises two corridors -- Srinagar in the north to Kanyakumari in the south, and Silchar in the east to Porbandar in the west. A deadline of 2007 has been set for these routes. The project comes under the Union ministry of road transport and highways. Its estimated cost is Rs 28,000 crore.

In December 2000, the pm announced another one of his pet projects -- the pmgsy -- which is being managed by the Union ministry of rural development. This plan envisages all-weather roads linking habitations with a population greater than 1,000 and 500 in the country (about one lakh villages) by 2003 and 2007, respectively. The project cost works out to Rs 60,000 crore.

The government has taken some policy decisions to attract private investments in road projects. For instance, it will "carry out all preparatory work including land acquisition and utility removal". It has been specified that the "right of way (will) be made available to concessionaires free from all encumbrances". Carrots have also been dangled before contractors as an inducement for completing the project before the deadline. Even as work is moving at breakneck speed courtesy of these incentives, environmental concerns have been run over.
To mitigate the effects of highway projects on the environment, the government has laid down guidelines such as making environmental impact assessments (eia) compulsory. The Union ministry of environment and forests (mef) came out with the eia notification in 1994. It encompasses projects involving construction of highways and other major roads. A scientist in the environment and road traffic safety division of New Delhi-based Central Road Research Institute (crri) elaborates: "Any new highway project with an investment upwards of Rs 100 crore and an expansion project involving investment above Rs 50 crore would require an eia study."

The crri scientist adds: "Though the assessment is not mandatory for smaller ventures, various environmental clearances -- no-objection certificates under the Water (Prevention and Control of Pollution) Act, 1974; the Air (prevention and Control of Pollution) Act, 1981; and consent under the Forest Conservation Act, 1980) -- have to be obtained from the state government and the state pollution control boards. Further, if the authorities feel an eia is needed, the client has to conduct the study irrespective of the project size ."

Earlier, in 1989, the Indian Roads Congress (irc), the premier body of highway engineers, formulated guidelines for eia of highway projects. The irc has drawn up an environmental management plan (emp) comprising five main components that need to be studied before constructing a road/highway:

borrowed earth: Excavation of soil for building roads subject to permission of the mef.

crushing: Crushers that supply gravel, a crucial raw material, have to obtain clearance from the mef as they cause noise and air pollution.

felling: The forest department and the mef regulate chopping down of trees. Not only are clients involved in the project expected to pay for the felling, a proposal also needs to be prepared regarding how and where new trees would be planted.

route: Special care is to be taken if a road passes near an ecosensitive area (see box: Impact zones).

blending: Hot mix plants that produce and supply bitumen are regulated since they emit hydrocarbons.

Another section of the eia is post-project monitoring of emp. "As per this, clients provide details of the steps they propose to take to minimise the impact of the project on the local environment," says the crri scientist. Apart from government agencies, bodies such as the World Bank and Asian Development Bank have their own environmental guidelines on whose basis they loosen the purse strings.

Sadly, these rules and guidelines are generally considered stumbling blocks to development by government agencies and construction companies alike.


"It has become fashionable for the government to wave aside even sound environmental objections, dubbing them as impediments to the project's progress," laments Sujit Patwardhan of Parisar, a Pune-based non-governmental organisation (ngo). Highlighting the case of the Mumbai-Pune expressway, he points out that environmental concerns have been left unaddressed during the construction of this stretch.

The mef has also watered down regulations controlling road projects, claim activists. Sunita Dubey of Environmental Justice Initiative, a New Delhi-based ngo, says: "The eia notification of 1994 has been tinkered with umpteen times to facilitate road construction." Significantly, an amendment to the notification was made in November 2001 exempting road projects "relating to improvement work". These include "widening and strengthening of roads with marginal land acquisition along the existing alignments, provided (they do) not pass through ecologically sensitive areas such as national parks, sanctuaries, tiger reserves and reserve forests".

"For widening or four-laning works, the area of land acquired is the deciding factor. If it is less than 20 metres, no environmental clearances are required," reveals V K Sharma, general manager (environment), irc. This, in effect, is an escape clause for several gq projects.

Another loophole in the law pertains to the construction of bypasses. "Such roads of towns and cities are not more than 3-10 km long. The project cost would, therefore, work out to less than Rs 100 crore and obviate the need for an eia," says Sharma. There are numerous such bypasses under the quadrilateral scheme which may bypass environmental regulations.

Interestingly, roads being constructed under the pmgsy also don't need an eia. "Most of them are short stretches and hence the exemption, " says the crri scientist and adds: "The scheme aims to provide access and connectivity to people living in rural areas, who have till now been deprived. If such projects are subjected to scrutiny and studies like eia, they may never take off." Experts and activists, however, refuse to buy this argument. Dubey puts a poser: "How can it be ensured that relatively small projects will not have adverse environmental consequences, and that the law will not be misused?"

Chandra Bhushan, of the Centre for Science and Environment, a New Delhi-based ngo, narrates his experience: "While travelling to the interior parts of Orissa, I saw how damage was being done to the local environment by road contractors. Topsoil from nearby plots, through which the pmgsy road was to pass, was being used to construct it. Several stone crushers had also mushroomed in the vicinity, creating noise and air pollution." mef and nhai officials admit that though they try to adhere to the norms, "minor violations" could be taking place "inadvertently".

A report, 'Roads, Sensitive Habitats and Wildlife', published by the Dehradun-based Wildlife Institute of India, observes that "contractors often do not have the technical expertise to assess what is needed, what it will cost and how to implement measures". It adds that, therefore, the responsibility for including "comprehensive environmental clauses lies squarely with the proponent (contractor's employer)".

The 2001 amendment has taken away the local people's right to protest as it has waived public hearings. The East Coast road in Tamil Nadu, which stretches between the southern outskirts of Chennai and Pondicherry, is a case in point. The highway has been freshly paved and converted into a toll road. A fortnightly national magazine recently reported that this decision was taken without consulting the residents of the area. Worse still, no attempt was made to compensate local people whose transportation costs have shot up. This insensitivity exemplifies the way in which the development agenda is being set in the country.

By inaugurating the expressway in Gujarat, the pm may have brought his dream plan one step closer to fruition. But so long as rules are circumvented to construct roads, such projects can only be an environmental nightmare.