Bamboo is key to rural growth 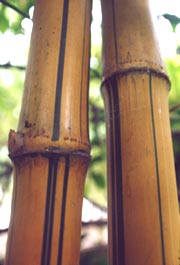 Is bamboo a type of tree or grass? For the inhabitants of Sandni village in Rajasthan's Chittorgarh district as well as thousands of others dwelling in rural areas across the country, this is a million dollar question. The reason: residents of such villages are legally entitled to 100 per cent rights over grass in the woodland protected by them under the Joint Forest Management (jfm) programme. It may be noted that though botanists consider bamboo a grass species, the Forest (Conservation) Act, 1980, does not categorise it thus. This has enabled state forest departments to conveniently wrest control of bamboo trade at a time when revenues from timber harvesting are drying up.

Against such a backdrop, the Planning Commission's comprehensive report -- entitled 'National Mission on Bamboo Technology and Trade Development (nmbttd)' -- couldn't have been better timed. The action plan, released in April 2003, charts out a strategy for the use of bamboo as a major rural poverty eradication tool. In addition it recommends policy changes to deregulate bamboo trade, which is worth approximately Rs 2000 crore. The document outlines the mission's objectives (see box: Long-term goals) and suggests major policy changes. It observes that bamboo can be a major source of employment, and consumption of its shoots could provide substantial nutrition to local communities.

In all, about 10 million people in India depend solely on bamboo for survival. There are 1500 documented uses of the product -- both for forest dwellers and the urban populace. Though India has the world's largest bamboo forests, it is a small player in the global as well as domestic markets. "There is a huge gap between the present and potential yield," points out the report. For a larger slice of the pie, India needs to expand its bamboo economy at a brisk pace to Rs 26,000 crore by 2015 (see: India's infinite money grass). The international market for the product is expected to grow from us $10 billion to more than us $20 billion during the corresponding period.

The action plan wants the agriculture, forest and rural development ministries to propagate bamboo in a coordinated manner. "Bamboo should be promoted as an important component of the agro-forestry system.... (It can be cultivated) as an agro-horticultural crop (since) it is amenable to annual harvesting, particularly edible shoots," states the report. In order to achieve this, bamboo should be plucked out of the negative list of export items and all restrictions on its movement need to be removed forthwith. "A policy to set up ... units under special bamboo processing zones in rural areas, (along with a) review of the existing excise (and) import policies, is necessary to give a boost to bamboo as a farm forestry activity," it observes.

Bamboo from domestic sources can substitute Rs 10,000 crore worth of imported pulp; the report therefore recommends imposing a 5 per cent duty on the latter to discourage its import. The mission also aims to propel demand for the product by promoting bamboo-based housing for 72 lakh families. Further, it would encourage the use of the material in earthquake and cyclone-prone areas and road construction.

An additional two million hectares of bamboo cultivation is recommended to keep pace with both domestic and export market demands. The report lays emphasis on the active role of jfm committees and panchayats in plantation activities. It has been mentioned that bamboo plantation could be a vital ingredient in the 'greening India programme', which endeavours to raise the country's forest cover to 25 per cent by 2007 and 33 per cent by 2012.

Given the right policy incentives, bamboo can create as many as three million new jobs in just the handicraft, cottage and tiny sectors. These would benefit two million rural poor artisans who are currently living below the poverty line. Increased availability of bamboo would also result in a turnaround of sick paper mills, thereby leading to the rehabilitation of 3.5 million retrenched workers.

The nmbttd assumes greater significance in the wake of the impending end (within four years) of large tracts of bamboo forest -- mostly in northeastern states -- after flowering. Plans, therefore, need to be chalked out post-haste to harvest the estimated 26 million tonnes of bamboo from these areas, take steps to regenerate the land and use the harvested crop to boost bamboo-based industries and economic activities.