The move will protect the livelihood of 30,000 families engaged in raw silk production 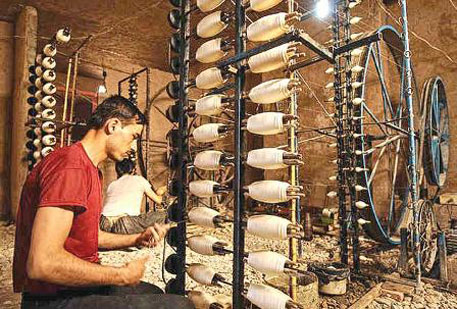 On January 28, Governor N N Vohra, who is in charge of the administration of Jammu and Kashmir, approached the Union Minister of State for Textiles, Santosh Kumar Gangwar, for increasing the customs duty on imported raw silk from 15 per cent now to 30 per cent.

The governor has also requested Gangwar to take up the matter with the Union Minister of Finance.

Reduction of customs duty has put the livelihood of about 30,000 families engaged in the production of raw silk at stake; most of these families live in rural areas.

According to a Raj Bhawan spokesperson in 2010-11, when the customs duty on imported raw silk was reduced from 30 per cent to 5 per cent, it had affected the production of raw silk in Jammu and Kashmir. Recognising the adverse consequences, the Centre revised it from 5 per cent to 15 per cent last year.

The Centre also invested over Rs 113 crore towards the development of the state’s raw silk industry under the Catalytic Development Programme. If the industry cannot be revived it would result in non-utilisation of the extensive infrastructure for silk production established during the past years, the Spokesperson adds.

The decision of revising customs duty has not been taken well by all. Many silk buyers and manufacturers, who depend on Chinese silk, have criticised the move in the past. They say the silk produced in India is not of high quality and might not get accepted in the international market. High customs duty will make the Chinese silk costlier. There are other silk manufacturers who say that the silk quality is equally good to compete in the international market and demand the roll back the customs duty.