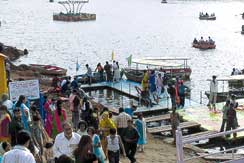 The Maharashtra Pollution Control Board (MPCB) has finally ordered the closure of 38 hotels in the twin hill stations of Mahabaleshwar and Panchgani, located in an eco-sensitive zone. Mahabaleshwar and Panchgani together generate 3,960 cubic metre sewage per day and discharge most of this in untreated form in Venna Lake and Koyna valley, respectively. "The MPCB has directed local authorities to immediately disconnect water and power supply to erring hotels, in accordance with the Water (Prevention and Control of Pollution) Act, 1974," said J B Sangewar, sub-regional officer, MPCB, Satara, which has jurisdiction over the two hill stations.

Local municipalities say they have followed the order. "Of the 38 black-listed properties, 12 are in Mahabaleshwar, of which only three receive municipal water and power supply. Their connections have been discontinued till further orders from the Bombay High Court (HC), which is hearing the matter," says D M Bawlekar, president, Mahabaleshwar Hill Station Municipal Council, Mahabaleshwar.

Earlier, HC had asked these hotels to apply to MPCB for consent to operate. Initially, most hotels refused to do so, claiming they were not an industry. But MPCB argued that they were a service industry, following which about 150 hotels applied. This forced HC to ask MPCB to shut down the erring hotels. "All they had to pay was Rs 1,000 as application fee...Now, not only have their water and power connections been cut, the district collector has also revoked their hotel license," says Bawlekar. As of now, HC seems to have spared the municipalities, which had to set up their sewage treatment plants by June 30, 2005 (see Down To Earth, 'Uphill task', March 31, 2005).