Fires ravage forests in many parts of northern India 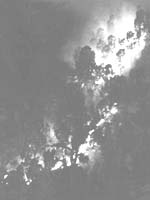 Forest fires raging in many parts of northern India have claimed many lives and destroyed property worth crores of rupees. The worst affected areas are Tehri Garhwal, Almora and Pithoragarh in Uttar Pradesh; Kangra, Hamirpur, Bilaspur, Solan and Sirmaur in Himachal Pradesh; the Bihar plateau; Mount Abu and the surrounding areas in Rajasthan. In the last one month, 350 incidents of forest fires have been reported in Garhwal and 100 in Kumaon, according to the office of the chief conservator of forests, Dehradun. The fires, which have been burning for over a month, have charred 80,000 hectares of forests, destroying pine, oak and deodar trees and much of the wildlife in Uttar Pradesh.

In Himachal Pradesh, where there are reports of fires in almost all the 38 forest divisions, 12,000 hectares of forests and plantations have been reduced to ashes.

Forest fires in the summer are not unusual and are generally believed to be the consequence of lack of moisture content in the elements of nature. When trees are totally dry, a small spark, caused even by the rubbing of leaves, is enough to start a fire. Unusual weather conditions make it worse.

Forest fires break out in mid-March and continue till the end of June, when the monsoons occur. However, the frequency of forest fires has increased dramatically after 1995. They have also become more and more unpredictable. The areas around Pauri Garhwal witnessed forest fires in the months of December and January this year. The local people, however, say it was a tragedy waiting to happen. They believe that a year of heavy rains is generally followed by very dry winters and last year, Garhwal experienced abnormally high rainfall.

Senior officials in the forest department say major forest fires occur every four to five years, and this year was a potential 'disaster year' because in 1995, a forest fire destroyed almost 10 per cent of the total forest cover in Uttarakhand and over 1,000 cases of major forest fires were reported from various parts of Himachal Pradesh. Knowing all this, the authorities chose not to react. "Forest department officials complain of lack of staff and equipments to meet the crisis," says Neeru Nanda, education secretary, National Capital Territory. "Even in areas where they have taken measures, routine steps like creating fire lines and control burning of forest areas are proving to be inadequate."

Some forest officials blame the local people who, they say, carelessly throw lighted bidis or cigarettes on dry grasses, starting a fire. There are also allegations that some people deliberately set the forests on fire as they are denied access to fodder from the reserved forests. A few officials believe that timber smugglers cut down trees and then start a fire to destroy any evidence of felling.

Ironically, one of the main methods applied to control forest fires often ends up being the cause of it. Scrubs and bushes, which are considered major culprits in spreading fires, are identified and ignited. This is supposed to be a controlled process to create fire lines, but it sometimes goes beyond control due to lack of personnel or sheer carelessness of the officials concerned.