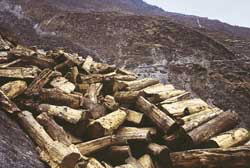 Everyone in Himachal Pradesh has an opinion on one issue -- timber distribution rights. These rights, instituted in the late 19th century, grant landholders timber from nearby forests at concessional rates. In a state wherelandlessness is less than 2 per cent, this provides timber to almost every family.

Though environmentalists argue this has led to heavy deforestation of hill forests, especially species like deodar, which have high price and demand, the issue has always been soft-pedalled by parties, because of its political sensitiveness. The rules about these rights thus remain unchanged.

But the Himachal Pradesh High Court has ordered a stay on the grants under these rights on June 2, 2006, in response to a public interest petition. It argues that with a rising population and, therefore, right-holders, it has become impossible for timber distribution to be sustainable any more.The petition also claims that grants are responsible for the depletion of green cover, attributing this to the widespread abuse of the right and misuse of the trees granted. It also blames the sanction of trees irrespective of silvicultural viability and the eventual routing of trees to the market, nearby sawmills and eventually out of the state.
Timber rights were originally given to forest villagers who settled in Himachal between 1870 and 1920. But the rates at which the trees are given were fixed in the 19th century and have not been revised. That is at the centre of the debate. "It is the huge differential between the timber distribution rates and the market rate, which eventually is responsible for the abuse of the rights. Rationalisation is essential," says an official. Foresters across the state echo this argument.

Although frequent executive orders have limited grants to one or two trees in every five years to every right-holder as against the earlier provision of unlimited timber, the nominal rates for the timber remain. The rates at that time were fixed at 20 per cent of the market value of the species, which means right-holders can buy trees for anything between Rs 3 and Rs 5. Ratios to market rates are incredible. For instance, the ratio for deodar has gone up from 15 to 19,000 and for pine from 18 to 115,000. The loss to the state runs into hundreds of crores. However, every attempt of the government to amend the rates has raised hackles in political circles and among timber contractors and sawmill owners. 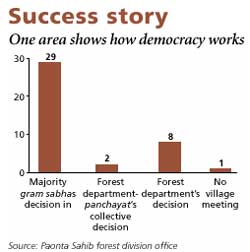 There's another problem -- fragmentation of holdings. This has happened as a result of the growth in population, with families partitioning land, whether or not they cultivate it together, multiplying timber rights. The forest department, in fact, does not have data on the total number of right-holders. "The total number of right-holders must be the total number of rural households in the state. We don't need to know the number of right-holders, just the number of applicants," says R A Singh, the state's principal chief conservator of forests. But the argument doesn't work since not all rural households own agricultural land. Also, in many places, whether legally or illegally, the right to timber is also sold off along with land to a new owner. When a portion of a plot is sold off the number of right holder increases again. "This kind of extension of rights is allowed for example in Kullu," says Vineet Kumar, conservator of forests, Shimla circle.
The right to timber is not in itself irrational, because it is essential to villagers and forest dwellers. The problem is that the system has not been rationalizsd with the passage of time."Timber distribution is very important, especially to the most disadvantaged section of villagers. This is the only commodity forest villagers actually get. They should get it," says Singh.


The process of granting rights in the Paonta Sahib division is surprisingly democratic and streamlined. Unlike most other divisions, where the gram pradhans approach the district forest officers (dfos) with recommendations on rights throughout the year, in Paonta Sahib the situation is different. With a huge demand for timber, the Paonta Sahib forest department had been grappling with demanding villagers and an unwieldy process of sanction. Faced with an accelerating crisis, Pushpinder Rana, dfo of Paonta, decided to democratise the process and go completely by the book.

As a result, meetings were held in each of the 40-odd villages attended by the dfo, rangers, all villagers and the gram pradhan, as mandated. Gram pradhans were not allowed to exercise a monopoly on recommending sanctions. Instead, goshwaras (list of right holders) were invited from each village, which were then scrutinised at the village meetings, inviting villagers' views. The goshwara process is the stipulated process, though it is hardly followed. The rules specify that no grant will be sanctioned in the dfo's office. Beneficiaries were thus selected at the meetings and limits were put on grants in every village on the basis of number of families below the poverty line and the number of trees available. Consensus was invited. When there was no majority decision, a lottery system was adopted. A total of 584 trees were granted in 2004-05 over an area of 36,000 hectares.

Out of the 40 panchayats, 29 reached a majority decisions on all issues and the forest department was able to keep sanctions within stipulated limits and the distribution of sanctions was more equitable three villages that had not received grants in the past few years received grants. (refer tables)

Though this process antagonised local politicians, villagers were satisfied. For the most part, villagers were glad at not having to run after the department for a single grant and at not having to spend money on each chase. "I applied for three years and finally got it this year," says Sadhu Ram of Pattalian village. But the local mla, Sukhram Chaudhary, has a different take. "Timber distribution is not a big issue at all. It has become big because previous governments used it for mileage. Everything is fine here." Even though many villagers were unhappy at not getting grants, most agreed that the process was simpler now.


But this process exists merely in one forest division. The Rohru-Jubbal division with a population of 136,000 (1,704 sq km) granted 2,911 trees sanctions for Rs 6,840, which had a market value of around Rs 17.3 crore. In this division, the usual method of the gram pradhan's recommendation works.

On being asked whether that can give rise to discrimination within villages, Manish Rampal, range officer, Khastar range, agreed. "Here we receive recommendations from gram pradhans throughout the year. The goshwara system is not followed. We only follow the recommendations," says Rampal. More seriously, the extraction under sanctions exceeds that allowed in the working plans of the division.

It is also necessary to note that the Supreme Court ban on green felling does not apply to extraction to fulfil right-holders' needs though it does ban extraction exceeding the working plans of a division.


The distribution rights system in Himachal survives in spite of repeated attempts to control and rationalise it. A draft bill was written in 1975 to fix the quantity of timber, periodicity of grants and rates with consideration for economic conditions of right-holders. It is yet to be introduced in the assembly. A similar effort was made in 1990 and another draft cabinet note was prepared in 2002, which looked at the possibility of restricting the number of right-holders and of granting converted timber. "We can keep making our own notes and comments but if the government has no will, it is of no use," says Singh.

The new Himachal forest policy also touches upon the subject but does not recommend any change in the current regime.

The policy does recommend a review of periodicity and a ceiling as well as a sliding rate scale based on the economic status of right-holders though.

But most observers agree that the new policy will gather dust like the earlier initiatives. And the deforestation will continue.