THE Himalayas are virtually under bombardment—of dams. They would have the highest dam density in the world, with over a thousand water reservoirs dotting the mountain range in India, Bhutan, Nepal and Pakistan, over the next few years. These projects would have serious ecological and social impacts and would spell disaster for the biodiversity of the region. All this for the much-sought-after hydroelectricity, officially dubbed cleaner and cheaper.

To assess the socio-ecological impact of the dams on the Himalayan region and the Ganga, Indus and Brahmaputra river basins, two researchers, Maharaj Pandit of the Centre for Interdisciplinary Studies of Mountain and Hill Environment at Delhi University and R Edward Grubine of Kunming Institute of Botany in China, used Landsat satellite imagery and spatial analysis. They studied 132 of the 292 dams in the Indian Himalayas, that were proposed or were under construction by 2005. Even if these many dams are constructed, there would be a water reservoir in every 3,000 square kilometres in the region. This is 62 times the global average dam density.

The study, published in Conservation Biology in December 2012, shows nearly 90 per cent of valleys and 25 per cent of dense forests in the Indian Himalayas would be affected. Over 54,117 hectares of forests would get submerged, while 114,361 hectares would be damaged by dam-related activities—nearly 170,000 hectares in total. Also, 88 per cent of the project sites fall in zones rich in plant, bird, fish and butterfly species. Researchers’ model shows by 2025 deforestation might make 22 flowering plants and 7 vertebrate types extinct. By 2100, 1,500 flowering plants and 274 vertebrate species would be extinct, according to conservative projections. 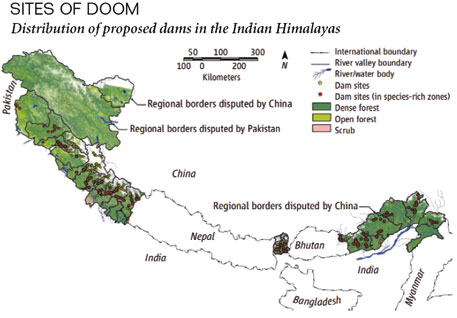 Jay Bhatt and Maneesh Kumar, of the Centre for Interdisciplinary Studies of Mountain and Hill Environment, conducted another study with Pandit to assess the impact of dams on fish species in 16 rivers in the Himalayas and Teesta river in Sikkim. The study, published in PLoS ONE in September 2012, shows unprecedented regulation of rivers and tinkering done with the fish’s habitat due to the dams would be a devastating blow to freshwater discharge and could lead to the extinction of many types of fish. Over 300 fish species are found here.

“Damming the rivers in Himalayas is an open invitation to disaster,” says Guman Singh, Coordinator of Himalaya Niti Abhiyan (HNA), an umbrella collective of grassroot resistance movements against indiscriminate development of hydel and other mega projects in the Himalayas. He cites displacement of people, loss of their traditional livelihood, submergence of fertile agricultural land and forests, and the destruction of traditional water sources and biodiversity as the key effects. “The issue of equity and for whom this electricity is meant should also be answered.”

In Himachal Pradesh alone, 41 hydel projects are running, 76 new ones are under construction and three have been abandoned due to environmental issues, according to the state’s electricity board. Resistance against these unmindful developmental projects is building up. HNA cites several victories for grassroots movements—ski-village project in Kullu-Manali worth thousands of crores of rupees has been stalled, the SEZ at Gagret in Una has been abandoned, environment impact assessment (EIA) of Lafarge Cement at Alsindi and Grasim at Sunder Nagar have been challenged in court, Renuka dam is stalled and the case is pending with the National Green Tribunal.

Environmental and social impact of hundreds of dams would be enormous and the number of affected people would run into hundreds of thousands, cautions Himanshu Thakkar, coordinator of South Asia Network on Dams, Rivers & People, a Delhi-based nonprofit that works on water-related issues. “No wonder dozens of dam projects are being dragged to courts for faulty EIAs and various other impacts.” He says corruption is behind this dam-building spree, that has caught the fancy of politicians, contractors and bureaucrats. Less destructive alternatives are not even considered.