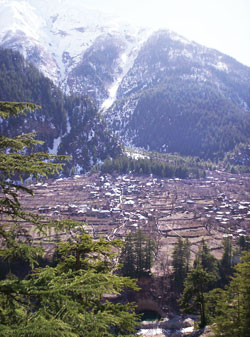 SEVENTY-five per cent of the Himalayan glaciers are thinning, states a recent analysis of satellite pictures taken by the Indian Space Research Organisation (ISRO). But before the alarm button is pressed, more detailed studies must be conducted, say scientists.

The report also states that eight per cent of the glaciers have advanced and 17 per cent are stable.

This is ISRO’s second report on glaciers. The first one, which studied 1,317 glaciers, was released in 2010. It claimed glaciers had retreated by 16 per cent since 1962. “To understand the complex system and processes involved in glacial science more research needs to be done. Higher global temperature because of climate change is one of the many factors responsible for the retreat. However, this is not the only one. Debris (rock under the glacier), ablation (erosion), position of the glacier and accumulation of snow also decide the rate of retreat,” says Ajai, group director of Marine, Geo and Planetary Science Group at the Space Applications Centre in Ahmedabad.

“It is difficult to understand the retreat of glaciers on the basis of a single parameter. This is true for any glacier across the Him-alayas,” says D P Dobhal, glacier scientist at Wadia Institute of Him-alayan Geology in Dehradun.

To reach a conclusion on the trend 15 years are too less a time, says Anil Kulkarni, visiting professor at the Indian Institute of Science in Bengaluru. “We should not conclude anything so fast. Further monitoring will make things clearer.”

The current rate of glacial retreat, as found by ISRO, could affect water and energy security by impacting on small hydro-power projects in the region, says Ajai.

Back to the IPCC controversy

In 2007, the Intergovernmental Panel for Climate Change (IPCC) had released its fourth assessment report claiming the Himalayan glaciers could melt away by 2035. The panel withdrew it soon after scientists criticised the claim for not backing it with scientific data. According to Murari Lal, lead author of the IPCC report, the information was taken from an interview of Syed Hasnain, then professor at Jawaharlal Nehru University, New Delhi.

The interview, published in the magazine New Scientist, was forgotten until 2005 when environmental group World Wide Fund for Nature (WWF) cited it in its report on glaciers. The IPCC quoted this WWF report in 2007 and suggested that the likelihood of glaciers retreating was “very high”. Later both New Scientist and Hasnain admitted that the information lacked scientific evidence.

All the observations need to be put in larger context, say non-profits. Correlation between the retreat and communities living in the region needs to be understood. Other phenomenon like impact of black carbon must also be deciphered,” says K N Vajpai, chairperson of Prakriti-A Mountain Environment Group, a non-profit working at Rudraprayag.

Glacial melting will be better interpreted once mass balance study is conducted, says Vajpai. In India, Wadia Institute of Himalayan Geology carries out this detailed study of glaciers. China is the only other country conducting similar studies, he adds.

At present, many Himalayan glaciers are in a healthy condition, says Ajai. His team has examined many glaciers. “They will not disappear,” he assures.