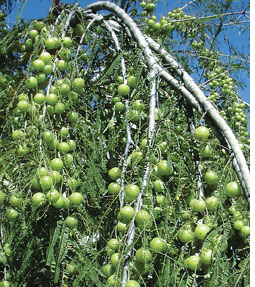 twelve species of medicinal plants preferred by Uttarakhand villagers for their many uses are now rare and endangered, and one near threatened. These are the findings of a recent study by the National Medicinal Plants Board of India.

One reason is the forest department's bias for coniferous trees, which are not so useful to the villagers. Other reasons cited for this ebb--in the state famous for medicinal plants and biodiversity--include overextraction of these trees for trade and the failure of the research community to develop techniques to grow these species in controlled conditions. A detailed paper on this was published in the December 25 issue of Current Science.

It questions the science guiding India's afforestation schemes. Among the 73 species preferred for medicinal use by the villagers of Chamoli, Pithoragarh and Pauri districts, only 17 per cent are included for plantation in the forest management plans. 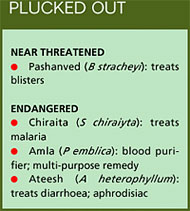 The study also points to the absence of consultation with the villagers in selection of plant species. This flies in the face of a government policy emphasizing this be done.

While the paper mentions--as do several other studies--that the forest department bears a part of the blame, Chandra Prakash Kala, lead author of the study, emphasizes that the biggest reason is that effective agro-techniques have not yet been developed to cultivate these species in nurseries. Research on such techniques began only a few years ago, and there are no results as yet.

Pushp Jain, a consultant on medicinal plants, points in a different direction: the forest department has promoted some local species, but the efforts failed due to indifference about the programmes and lack of independent monitoring. The danger, Jain says, is not from villagers' personal use but illegal harvest for trade to feed the growing ayurvedic industry.