How it affects wildlife 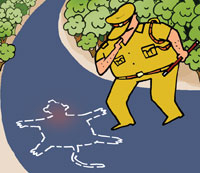 HIGHWAYS passing through the protected areas of Bandipur in Karnataka and Mudumalai in Tamil Nadu have been closed to night traffic in the past year. Reason: wild animals crossing the road are often hit by speeding vehicles. Theories abound on the effect roads have on animals: larger and more mobile species are said to be at higher risk as they use roads more often; species with lower reproductive rate and long life spans are more susceptible as once their populations dwindle, it takes longer for them to recover.

Researchers at Carleton University, Canada, put these hypotheses to test by studying the relative abundance of 17 mammal species across landscapes with varying road density within eastern Ontario. The study showed animals with low reproductive rates are more affected by roads.

The team looked at mammals ranging from small ones like the white-footed mouse to larger ones like the red fox and the black bear. Over three years, the researchers sampled various forest patches. One of the ways they used to estimate species abundance was by using track traps made of PVC tubes lined with carbon-black smeared wax paper. The number of footprint tracks on the tubes were counted on a weekly basis. The team found that there were fewer tracks of large mammals near the roads, showing they were affected. The study was published in the early online edition of the journal Ecological Applications.

The scientists said priority should be given to mitigating the effects of roads on the larger mammals. In India, it is the reptiles, amphibians and birds that are most affected in terms of road kill, said K V Gururaja, a sustainable transport expert at Indian Institute of Science, Bengaluru. He has studied amphibian road kill in different landuse areas.

“Perhaps the reason mammals do not get killed as frequently here is that they learn to stay away from roads,” said Gururaja. “Night traffic is a bigger problem since many animals freeze when a light shines in their eyes making them certain casualities,” he added. Environmentalists are now pushing for roads that skirt forests and don’t fragment them.