Rural agricultural practices in the UK maybe in for an automation invasion. Robots, instead of humans, will pick and sort through vegetables and fruits, milk cows and guide farm vehicles 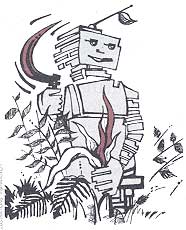 RESEARCHERS at the Silsoe Research Institute near London have developed automatic devices which can carry out farm operations at lower costs and are more efficient. The catch in designing the system was to develop machines which could deal with both living and non-living matter and change their mode of operation according to need (Global Technoscan, September. 1-15).

In achieving such a high degree of sensitivity, computer vision systems proved to be very helpful. For the purpose of picking mushrooms, and that too with precision at the exact stage, the Silsoe team has developed a vision system which detects mushrooms by their circular and dome-shaped appearance. Selecting mushrooms for harvesting is dependent on their sizes and positions.

The device is fitted with a monochrome video camera which produces images made of 256 shades of black, grey and white. This helps in identifying and grading the different types of mushrooms to which the system assigns a reference number. The computer system thereafter helps in deciding which mushrooms to pick and the best way to do so. The robot places a suction cup over the mushroom to be picked and turns it away from the neighbouring mushroom, twisting and detaching it from the growth medium. The automated harvesting would save about two-thirds of the time normally taken to do the job manually. The team plans to carry out developmental research projects on other farm operations like trimming.

Meanwhile, another group at the Institute is working on developing a robot which would help milk cows. Cows can be milked at any time of the day by these efficient machines. The cow to be milked enters a stall which is automatically adjusted according to the size of the animal. When the cow presses against the robot, it lifts its arms and fits teat cups in place. When air pressure reduces, the robot's arms sag to the ground allowing the cow to walk out of the stall. The robots have achieved a success rate of 87 per cent in attaching teat cups. The system would reduce labour and voluntary milking by the cows, and will increase the yield of milk by 15 per cent.

A third Silsoe team has developed a robotic manipulator which not only picks tomatoes but also grades and packs them into plastic trays. Analysis of infrared images help to guide the vehicle to a row of plants allowing automatic movement up and down the rows at a speed of about two m/sec. The robot could even double as a medium for spraying pesticides in the case of horticultural crops.

There are many more such ideas lining-up at the Silsoe Institute which, once actualised and marketed, would transform the idyllic image of an easy-going, slow-paced farm. Farms in developed countries would look like Japanese car manufacturing units, where the idea of automated farms took seed.