A Chinese medicinal plant known as long ago as 168 BC has been found successful in checking malaria, which is becoming increasingly resistant to most drugs 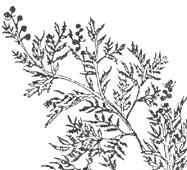 A CHINESE herb, Artemisia annua, say scientists, has yielded a wonder drug -- artemether -- which is 3 times more effective than quinine in treating malaria that is resistant to most drugs. They have also found that artemisinin, an oil extracted from the plant, has cut to about 1/5th the deaths due to malaria in Vietnam.

An artemether drug trial was conducted in Thailand over 2 years ago and the results have only recently been analysed. Juntra Karbwang of the Hospital of Tropical Diseases in Bangkok conducted the trial that covered 97 patients with complicated and severe multi-drug resistant malaria. The trials revealed that intramuscular injections of artemether saved the lives of 41 of the 47 patients -- or 87 per cent -- while quinine could save only 32 of the 50 patients intravenously administered the traditional malaria drug.

Says World Health Organization (WHO) director general Hiroshi Nakajima, "The scientific demonstration of the success of this drug in an area where malaria is so resistant to other drugs is a dramatic step forward for health."
According to WHO reports, the drug is free from side-effects and no fatal adverse reactions have been observed. In 2-year trials soon to be completed in some African countries, where the resistance of the malarial parasite to quinine is not a problem, scientists have found that artemether is as effective as quinine in combating the disease. Other trials with artemether have been completed or are in progress in China, Brazil, Vietnam and Brazil.

In Vietnam, in 1991, the government began encouraging the cultivation of A annua and the simple extraction of artemisinin from A annua, without any chemical derivation. The use of this drug, made widely available in the form of tablets, capsules and powders reduced deaths from malaria to about 1/5th.

Each year, malaria -- caused by microorganisms Plasmodium falciparum or Plasmodium vivax -- affects about 300 to 500 million people, killing 1.5 to 3 million of them, according to WHO. Some 90 per cent of the cases occur in Africa alone. Of the remaining cases, 38 per cent are reported from India. Brazil, Afghanistan, Sri Lanka, Vietnam and Cambodia account for the rest.

Another approach being tried out by scientists the world over is developing malaria vaccines. The Plasmodium carrying mosquitoes, which spread the disease, are also targeted.

Artemisinin -- the new malaria drug -- was first mentioned in an apothecary's list entitled Prescriptions for 52 kinds of diseases, dated 168 BC. It was considered a possible anti-malarial only in 1972, when it was analysed in China during a survey of traditional medicine.

Other derivatives of artemisinin are also being explored by scientists funded by the Special Programme for Research and Training in Tropical Diseases of the United Nations Development Programme, the World Bank and the WHO. A related drug -- arteether -- is under development and a Dutch pharmaceutical company plans to manufacture it. Scientists are also exploring the possibility of developing synthetic analogues of the drug.

Scientists find that all artemisinin derivatives act in a similar way. The molecule has an unusual peroxide bridge of 2 linked oxygen atoms spanning a 5-atom carbon ring. In the presence of haem -- the iron containing portion of the haemoglobin molecule which is present in red blood cells and carries oxygen in the human body -- the oxygen in an artemisinin molecule is released and it damages the parasite. When the parasite injests haemoglobin in the presence of artemisinin, the oxygen released by it knocks out the germ.