Certain rocks, discovered literally in the pits of the earth, could substantially change the prevailing tectonic theory 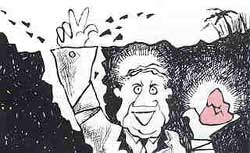 THE discovery of certain rocks in the Swiss Alps is proving to be an earth-shattering news for geologists the world over, as it holds the promise of shaking the basic tenets of the subject. Found high in the mountains of southern Switzerland, near the Italian border, these rocks are thought to have originated much deeper than was previously believed.

A team of scientists led by Harry W Green, a geologist from the University of California at Riverside, us, recently discovered a half-mile long and quarter- mile wide chunk of rock, containing minerals with an unique crystal structure. The presence of these deep red- dish-violet garnets surrounded by bright green minerals indicates that the rock has originated at depths of about 670 km under conditions of high temperature and pressure. There are rocks which form in the earth's interior, at a depth of eight-16 km in the case of metamorphic rocks, and at a depth of 80 km for volcanic rocks.

The team believes that the newly- discovered rocks were first pushed deep down as part of the subduction plate, due to the tectonic forces created by the collision of Africa and Europe, 50 mil- lion years ago. Later as the Alps formed, the rock jumped back to the surface, seemingly propelled upwards by some buoyant force.

The Washington-based National Science Foundation has deemed the evidence as "geologically astounding". If confirmed, scientists feel that it will mean a revision of the theory of plate tectonics, according to which the surface of the earth is made up of a dozen or so big slabs, kept afloat on hot molten rock. These slabs are in constant motion arranging and rearranging themselves like a jigsaw puzzle. The finding contradicts the belief that the continental crust is never destroyed and remains ever- constant, by suggesting that some part of the crust can travel to great depths and then pop back to the surface.