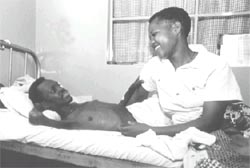 amidst the gloom cast by the knowledge that there is very little hope of survival for the increasing number of people with hiv/aids, there is some good news. At least in respect to transmitting the virus to their spouses. A recently-published study claims that hiv -infected people are less likely to pass the virus on to an opposite sex partner if they have low levels of the virus in their blood. In other words, viral load is the factor as also critical predictor of hiv transmission between men and women, regardless of which gender transmits the virus.

This study was carried out in heterosexual couples in Uganda -- one of the sub-Saharan African nations where aids is rampant -- by us and Ugandan researchers led by Thomas C Quinn of Johns Hopkins University in Baltimore, Maryland. "With every 10-fold rise in the concentration of hiv in the bloodstream, transmission more than doubled. Just as drugs have helped reduce perinatal transmission, antiretroviral regimens that dampen hiv viral load should also be effective against heterosexual transmission of hiv ," says Quinn who is also a senior investigator at the National Institute of Allergy and Infectious Diseases, Bethesda. This team of researchers also found that circumcision was significantly associated with decreased hiv acquisition and that younger couples (15-19 years) experienced the highest rates of infection. They did not find any statistical difference in the rate of transmission from male to female com pared to female to male. ( The New England Journal of Medicine vol 342 No 13).

The work assumes significance as heterosexual transmission is responsible for more than 80 per cent of the estimated 50 million cumulative infections of hiv -1 worldwide, and it is the predominant mode of transmission in sub-Saharan Africa.

In an effort to better identify risk factors for heterosexual hiv transmission, the scientists observed 415 couples of which only one person was hiv positive. The couples, all residents of Uganda's rural Rakai district, received free condoms and hiv prevention education, as well as confidential hiv testing, counseling and treatment. They did not receive anti- hiv drugs because they are not available in this remote area of Uganda. The research team visited the couples at 10-month intervals for up to 30 months, conducting private, same-sex interviews. Researchers assessed a variety of factors, such as condom use, numbers of sexual partners, intercourse frequency, general health history, aids -defining symptoms and circumcision. Study volunteers provided blood and urine samples, and women provided self-collected vaginal swabs for evaluation of hiv and sexually transmitted diseases.

Using the polymerase chain reaction to measure viral load, the researchers discovered that, over the 30-month study, 22 per cent of the previously uninfected partners became hiv positive and that, as the volume of hiv rose in the blood, so did the possibility that a person would infect his or her partner. Nearly 80 per cent of the cases of new infections resulted from exposure to hiv -positive partners who had more than 10,000 copies of hiv per millilitre of blood. Individuals who had less than 1,500 copies of the virus per millimetre of blood did not transmit the virus.

Researchers say that drug therapies that suppress the virus could significantly reduce the spread of the disease. Thus, trials of such interventions should be considered a public health priority. For resource-poor areas like Uganda, extra effort is needed to develop low-cost methods of reducing viral load.