Holes in the wood 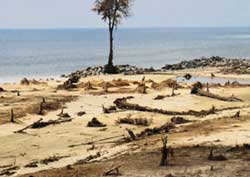 coastal mangroves and green belts offer little or no protection against the power of a tsunami, according to a recent study.

Conducted by the arc Centre of Excellence for Coral Reef Studies at James Cook University in Australia, the University of Guam, and the Wildlife Conservation Society-Indonesia Programme, the study has overturned claims that death rates were lower in villages shielded by mangroves during the 2004 tsunami.

The findings challenge current advice by the United Nations Environment Programme, ngo s and scientists that 'green belts' and buffer zones be incorporated into reconstruction efforts to protect villages from future tsunamis. The World Conservation Union (iucn) has launched a us $45 million programme that aims to build natural barriers of mangroves in 12 countries of Asia and Africa.

The study raises questions about how useful such an approach would be. "In fact, these green belts may give a false sense of security, leading to greater loss of life should such an event recur," warn researchers Alex Kerr, Andrew Baird and Stuart Campbell. The study appeared in Estuarine and Coastal Shelf Science (Vol 67, No 3, April 2006)

The scientists conducted a fresh analysis of data from a recent study, Coastal mangrove forests mitigated tsunami by K Kathiresan and Narayanasamy Rajendran, which was published in an earlier issue of the same journal (Vol 65, No 3, November 2005). "Our re-analysis revealed that the distance of a village from the coast and the height of the village above sea level (and not vegetation) explained 87 per cent of the variation in mortality among villages," says Kerr. The apparent link between vegetation area and mortality was actually due to the fact that more vegetation grows at higher elevations above sea-level -- and the greater the distance from the sea, the greater the area of vegetation. "It's a beautiful idea that green belts can stop a tsunami, and its aims are commendable. But it isn't true, and it won't work."

Baird also criticises the promotion of buffer zones. He says in several cases, the idea of buffer zones is being used by developers and local authorities merely as a pretext to shift communities so they can then build tourist facilities on the vacated shoreline.

"The study highlights the various legislative and other impediments being used to prevent people in India, Sri Lanka and Thailand from rebuilding their homes in buffer zones. Our main concern is that bad science is being used to justify policy which can cause large-scale social injustice," says Baird.

But Rajendran and Kathiresan, the authors of the earlier study, are dismissive of the re-analysis. "The criticism of Kerr, Baird and Campbell is neither based on their own observations nor on field data collected by them," says Kathiresan. "They only emphasised the importance of human habitation and its location characteristics rather than mangrove shield in tsunami-related human kill. We stressed the importance of both in our paper," he adds.

Other experts are also not convinced. "The comments in this recent study are very unfair. Any one who reads these papers (both the studies) with an open mind would understand the fact that mangroves or any other green belt would play a role in mitigating the impact of a tsunami," said V Selvam, programme director, Coastal Systems Research, M S Swaminathan Research Foundation, Chennai.

T G Jagtap, a scientist with the National Institute of Oceanography in Goa, agrees. "Any moving object, if obstructed, loses force. It is same with any natural coastal barrier, which obstructs stormy waves or sea currents, minimising the impact and the damage," he says.

But he criticised the Indian scientists for an oversight. "Kathiresan and Rajendran in their studies have neglected basic statistical parameters to analyse the data. As a result, contrasting observations were derived and further interpreted accordingly," concludes Jagtap.

Significantly, iucn had found that the 2004 tsunami killed only two people in Kapuhenwala, a Sri Lankan village, which was surrounded by 200 hectares of dense mangrove and scrub forest. In contrast, nearly 6,000 people died in nearby Wanduruppa village, where mangrove forests had been cut down. A study by a team of researchers led by Finn Danielson of the Nordic Agency for Development and Ecology in Denmark had also highlighted the protection mangroves offer.