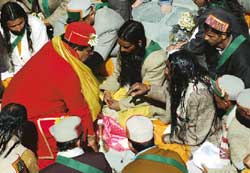 On February 16, 2006, 'gods' came together at the Jagati Patt temple inside Hotel Castle in Naggar village, district Kullu, Himachal Pradesh. Local gods were there to discuss a proposed ski resort in the area. Based on these divine proceedings, the traditional king of Kullu, Maheshwar Singh gave a final verdict -- not an inch of land should be given for the resort. The refusal to give land was because it was supposed to belong to the gods.

Singh said this 'message' from the gods would be passed on to the government. This was not what the spokespeople for The Himalayan Ski Village (hsv)Pvt Ltd had expected. It had also 'consulted' two local goddesses before going ahead with its proposal. hsv, which is headed by Alfred Brush Ford grandson of Henry Ford, signed a memorandum of understanding (mou) with the government of Himachal Pradesh on December 9, 2005. A draft mou had however been leaked, which provoked the most powerful god, Jamlu or Jamdagni Rishi of Bhatar village, to get in touch with his pujari, Ludramani and sent a message to the king that consultation (jagati poonch) was required. Such meetings are usual in the area and are used by people to voice concerns that affected the community. The dev bhumi has around 365 gods and they often make their voices heard through representatives: gurs, pujaris and kardhars. A date was set for the meeting. Along with gods' representatives, came people from the villages and the media.

What followed next might be difficult for a non-believer to comprehend. The representatives were seated in rows and the king went around asking each to speak his or her mind. This prompted the representatives to go into a trance, after which the gods spoke through them. God after god spoke and made it clear that they did not want the ski village in the area since it would desecrate holy places. They warned the people that if the project was approved, the gods would leave and destroy the area. The local people hung on to each word.

The hsv officials could not believe that even the goddesses who had initially approved their project had turned against them, deciding to go with the majority. The officials said that they would once again call the gods and seek their approval. Meanwhile, they made their discontentment evident by finding fault with the way the jagati was handled. Only around 200 representatives had come -- why were the others not called, they asked? Why were officials of hsv not called to put forth their version of the story, they queried.

"The meeting was conducted honourably as per the ancient laws," says Singh. Since everyone does not speak, the final decision is taken on the basis of a simple procedure called malohi -- balls of cow dung (pogle) are made and either a root or flower considered sacred is put in it. These balls are then put in a bucket of water and the verdict depends on the ball that floats up first.

People from Bhatar point out that it was strange that while hsv officials were not willing to accept the verdict of the gods delivered in front of thousands, they expected others to believe their project had divine blessings.

According to hsv, the proposed project would be located above Shuru village -- 2,000 metres above sea level. A special ecotourism zone of 12,910 hectares (ha) would be developed on the eastern side of Beas River including the Pakhnoj nal and Alaini nal. On the east it would reach Tikru Tapri. The project cost was estimated at us $350 million.

The project had proposal for a ropeway with one terminus in Shuru village, around 300 villas on private land and also, on an erstwhile state potato farm, a 770-room luxury hotel, a sports centre, skiing slopes and a big parking area. All these would be connected by a ropeway. According to hsv officials, the mou is just a preliminary agreement -- a go-ahead from the government. A preliminary project report was supposed to follow and later an implementation agreement would be made. A detailed project report and environment impact assessment would follow.

Though the final mou was a diluted version of the one that was leaked out earlier, there are some worrisome points in it. As per the document, the government would lease the company 5 ha of forestland for a ski school and gondola towers -- subject to permission from the Union ministry of environment and forests. The government would grant an irrevocable licence for 99 years to the company for the use of ski trails and making snow for such trails. Licences would also be given for construction of retention ponds, underground water lines and water pumps. John Sims, managing director of hsv, however , said later that they were not going to make snow in the area and would not be using any of the water sources, despite what was written in the mou, ( see box:Making snow.)

The government would assist in acquiring up to 60 ha of private land at market price, if needed. In return, the state would get somewhere between Rs 35 and 60 crore annually from the project as revenue. The company would also give an additional Rs 25 lakh for tourism development. The entire valley's tourism business at present is around Rs 300 crore and getting Rs 60 crore from just 5 ha of land does seem lucrative. The company also promises to provide around 3,000 jobs to the local people.

What the voices from the heavens actually said, may not be entirely verifiable, but it is clear that the project was embroiled in the state's politics. The mou was signed by a Congress government. The Bharatiya Janata Party (bjp) general secretary, Chander Sen Thakur, got hold of it and leaked it. It is alleged that he made changes in the actual mou to instigate people. Others believe that hsv leaked the mou to ascertain public opinion. Singh is a member of the bjp, and there are people who say that he wants to cash in on people's religious sentiments for his party's objectives. hsv feels that they have been dealt a raw deal. After all, other development projects in the area have gone ahead, they say. They talk about the hydel projects which are being carried out and point out that heli-skiing is taking people to the same sacred spots that their gondolas would be going to.

As of now, the two parties have made their stands very clear. The bjp will not allow the project to go ahead at any cost. They have even included the issue of the proposed village site in the agenda claiming that the area's proximity to the Chinese border could prove a threat to security when many foreigners would gain access to it. On the other hand, Chief Minister Virbhadra Singh has clearly said that his government will go ahead with the project on the basis of merit, regardless of what the gods say.

Kahar Singh Thakur of Sharan village says that since the gods have given their verdict the people are prepared to go to any length to ensure that the project does not go through. On the other hand, there are villages like Jagatsukh, which would benefit from the hsv project, because land prices would go up. They are in favour of the project. Environmental groups are happy with the decision taken at the jagati. "Development should take place on land where there are people and not on the mountain tops," says Kishan Lal, director, Himalayan Paryavaran evam Vanya Prani Suraksha Smiti, Manali.

The Kullu valley is already a prominent tourist area and the state can develop the area in a systematic manner. The number of Indian and foreign tourists has been increasing steadily in the last few years. "Though extensive infrastructure (meaning a large network of hotels) is available in the area, it is used only for around three months. The ski village could extend this period to around nine months," says Raj Kishen Gaur, the local Congress mla and former state tourism minister. But given the fact that hsv plans to make a big hotel, his logic does not seem to follow. Another reason Gaur gives for letting the project go ahead is that it would promote the sport and Manali could then be used as a venue for the Winter Olympics. But Sims's claim that snow is not going to be made makes it clear this is not going to happen, because artificial snow is needed to meet Olympic standards.


hsv is based on the American ski resort model more geared towards real estate development than promoting tourism or skiing. This type of development also takes away business from local entrepreneurs. According to Gautam Thakur, president of the Manali Hoteliers Association, while they have no problems with infrastructure in the form of ski lifts and the like, they are opposed to the luxury hotel and the villas.

When asked whether the company would be willing to invest just in the infrastructure and not the hotel, Sims says that this would not be a viable business proposition. Iqbal Sharma, chairperson, local advisory council of hsv, contends they would be making the hotel on private land and it would be similar to any other hotel in the area. The problem is that the mou agrees to exempt hsv from a state law that does not allow the sale of land to non-Himachal residents. The company wants this exemption to be able to sell the 300 villas at prices higher than what Himachalis can afford.

People involved in high-end tourism in the state say that the government should encourage the Switzerland model, which promotes "low-density, high-value" tourism. Estimates show that adventure sport activity like heli-skiing can generate around Rs 5 crore through 1,470 guest nights in 70-day occupancy during 2005. To make this kind of profit a luxury hotel in Manali hotel would have to host about 39,000 guests to generate the same amount of revenue. More guests would lead to greater environmental impact. But heli-skiing has its own adverse effects and it is not advisable to increase risks such as avalanches.

On the other hand, the Swiss model concentrates on helping local communities develop infrastructure and benefit directly from tourism, by providing more opportunities to develop local businesses. The Swiss government recently passed a law specifically designed to restrain real estate developers from following the us resort model.

hsv is trying to sell itself in India as a model for a socially responsible and planned tourist trade. But the business model it has developed does not inspire confidence in this sales pitch.

Even if the government clinches the deal, it might have to factor in the interests of local communities. If for no other reason, then to appease the gods.