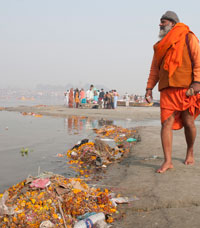 The Shankaracharyas and sadhus, who have gathered at Allahabad for the Maha Kumbh alog with the 13 akharas, have threatened to boycott the next Shahi Snan (royal bath) falling on Mauni Amavasya day on February 10. They have given an ultimatum to the government that the quality and level of water in the Sangam, confluence of the Ganga and the Yamuna rivers, should be improved by then.

The sadhus have also threatened not to vote in the next general elections in 2014 if the Ganga is not protected. The seers had taken a similar stand during Maha Kumbh of Haridwar in 2010. But since the Maha Kumbh in Allahabad is considered the holiest and attracts the largest crowd from all over the world, the seers believe government will now pay heed to their demand.

Harichaitanya Brahmachari of Shriparamhans Ashram in Tikar Mafi in Amethi, who is also an activist, led the congregation of saints and helped reach a consensus on the matter of Ganga pollution. The godmen have decided they will vote in the 2014 general elections only for the party that pledges to protect the Ganga and the Hindu culture.

Agitated over rise in pollution levels in the Ganga, the godmen met at the Sangam ghats and discussed a way to put pressure on the government to take initiatives to stop effluent discharge into the river from various industries along its course. They decided to boycott the next Shahi Snan and passed a unanimous resolution that they would vote for that party which takes steps to protect the river or else they would not vote at all.

Jagat Guru Shankaracharya, Swami Vasudevanand Saraswati, Shankaracharya, Swami Narendranand Sarawat, Shankaracharya Swami Shardanand of Kandara Peeth and a large number of Dandi swamis were present during the meeting. They lambasted the government for being callous in handling river pollution. They demanded effective capping of effluents discharged into the Ganga and sufficient volume of water in the river throughout the Mela.

Harichaitanya said that the colour of the river has changed. "If the government does not hear us this time, it should be ready to face dire consequences in the next general elections," he said, adding that the government is cheating all the pilgrims who have come to the Kumbh. The kalpwasis (pilgrims who stay in temporary shelters along the bank for an entire month and spend their days performing rituals and bathing) and saints not only bathe in the river on the day of Shahi Snan but also drink its water. “On the day of Shahi snans, the water level is increased in Ganga and it recedes within 24 hours. This is cheating innocent pilgrims,” he said.

Ganga is deteriorating fast and there is no more time for mere symbolic demonstations or steps; concrete steps have to be taken soon, he said. The seers also said that it is a conspiracy hatched by western forces to destroy the culture and traditions and that at this rate there would be only chemicals flowing in the Ganga.