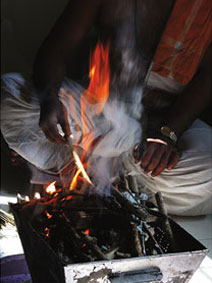 the ritual of burning medicinal plants to produce 'purifying' smoke is common to several religions. Hinduism has havan and Islam, bukhur (see box: Smoky remedies). Most modern physicians, though, are sceptical, saying the smoke might actually do more damage than good. So scientists at the National Botanical Research Institute in Lucknow decided to test whether havan smoke affected indoor air quality. They burned havan samagri --the mixture of aromatic medicinal herbs typically prescribed for Hindu rituals in a closed room. They found smoke from the material did kill germs. And it was not just any kind of smoke; they compared the effects of smoke from mango wood with those of havan material.

"There was no reduction in the number of airborne bacteria when one kg of mango wood was burnt.But when half a kg of havan samagri was added to it, the bacterial count reduced by 94 per cent within one hour," said Chandra Shekhar Nautiyal, head of the division studying plant-microbe interaction at the institute. The bactericidal effect did not diminish as soon as the source of smoke was removed. The researchers sampled air quality over 24 hours, after which the room was opened. Even at the end of the duration, the bacteria count was 96 per cent lower.

Repeated sampling showed the effect lingered for a month. "The absence of pathogenic bacteria in the open room even after 30 days indicates the bactericidal potential of the medicinal smoke," Nautiyal observed. The study was published in Journal of Ethnopharmacology (December 3, 2007). The study may have implications for the use of smoke from medicinal herbs in confined spaces like animal barns and grain warehouses. 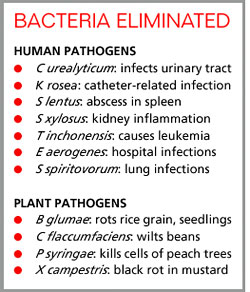 Airborne transmission is known to cause infection in animals and plants. The Lucknow researchers say certain known medicinal constituents from the havan samagri could be added to the practice of burning of farm wastes. But what about the pollution? Satish Bhat, a Vedic priest at the Maharishi Ved Vigyan Vishwa Vidyapeetham in Noida, Uttar Pradesh, believes if there were adverse effects, someone like him would be the first to notice them.

Is the scientific community convinced of the beneficial effects of havan smoke? Not T K Joshi, director of the Centre for Occupational and Environmental Medicine at Delhi's Lok Narayan Jai Prakash Hospital. "The havan smoke might have medicinal properties but, overall, smoke is an irritant and has a negative impact on human health," he said. S K Chhabra, cardio-respiratory physiologist at the Vallabhbhai Patel Chest Institute at University of Delhi, added a word of caution: "Smoke is an irritant. If it removed bacteria, it could be due to this property. Researchers should study the chemical properties of individual ingredients from havan samagri to establish this."