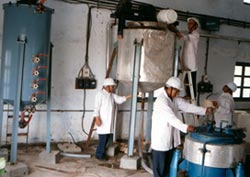 india, which entirely depends on import to meet its requirement of two million tonnes of the potassic fertiliser, has taken the first step towards manufacturing the vital plant nutrient. The Bhavnagar-based Central Salt and Marine Chemicals Research Institute (csmcri) has developed a technology to produce potash from seawater.

Though seawater is a potential source of potash, it is hardly exploited by the Indian salt industry, which produces 14.5 million tonnes of common salt. Reasons: firstly non-availability of indigenous technology; secondly, the salt industry, for which the potash production could be a viable side business, comprises mainly of widely dispersed small and medium scale units. For these enterprises, potash recovery from seawater is generally an unattractive proposition. Even the csmcri technology has not linked production of salt with potash. "This is because the volume of potash that can be produced as a by-product by the salt industry is limited and hence the profits may not match with the investment required," says P K Ghosh, director of csmcri.

The institute, which sustained a laboratory-scale 100 kilogrammes per day production facility for two years, has recently handed over the technology to a shipping firm, which is diversifying into the production of fertilisers and other chemicals. The firm, with part funding from the Technology Information, Forecasting and Assessment Council of the Department of Science and Technology, is setting up a semi-commercial plant with an annual capacity of 2,500 tonnes at the Cori basin of the Great Rann of Kachchh. "The Rs four crore plant is expected to be up and running in 18-24 months," says Ghosh.

Cori basin is a low-lying area. The entire region is swamped by seawater during tides. A concentrated solution, called sea bittern, mainly containing salts of potassium, sodium and magnesium is left behind as the water evaporates or penetrates into the soil. Sparsely populated, the area currently produces bromine, an industrially important chemical also extracted from sea bittern.

According to Ghosh, the technology, to be soon patented, entails the use of the effluent discharged from the bromine manufacturing plants as the major raw material. The fertiliser is expected to be of a much superior quality than the imported variety. World over, two types of potassic fertilisers are produced: muriate of potash, which is nothing but potassium chloride, and sulphate of potash. The latter is considered to be of superior quality, as it also supplies another important plant nutrient -- sulphur. "This fertiliser is particularly important for many major crops such as tea, potato and tobacco," says Yadvinder Singh, a senior soil chemist with the Punjab Agricultural University, Ludhiana. Its price in the international market is high by a factor of two.

Ghosh is confident that the indigenously produced potash, despite being of superior nature, will be equal to the landed price of muriate of potash. Besides, csmcri has also developed a process to produce magnesium oxide, industrially known as magnesia, as a by-product of the potash production process. Magnesia is a key ingredient used in refractive and other industries. It is estimated that the potash plant will produce 1,250 tonnes of magnesia of relative better quality. India currently imports high-grade (99 per cent pure) magnesia, though inferior quality magnesia is available from magnesite ore mined in the country. "With 94-95 per cent purity, we hope we can strike a middle path," says Ghosh. The total magnesia requirement in the country is about 100,000 tonnes per year.

According to D C Biswas, an agronomist with the New Delhi-based Fertiliser Association of India (fai), the feat is significant. But, it is still a long way before anything could be counted. Ghosh is hopeful that the scale of economy will also play in favour of the indigenous potash production. Besides, the costs can be further brought down once the furnace oil, the expensive fuel used in the potash plant, is replaced with lignite, a low-grade coal abundantly found in area around the Great Rann of Kachchh.

More importantly, the entire process is ecofriendly as limestone is the only raw material added from outside to make the fertiliser. "Our primary ingredient is effluent of another industry. We are paying them for the effluent too," says Ghosh.