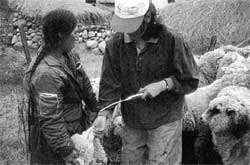 finally, there is some respite for the sheep-raising farmers of San Juan de Jarpa and Yanacancha districts in the upper reaches of the Cunas river in the Peruvian highlands. Distomatosis, a parasitic disease locally known as alicuya, had severely affected the sheep and cattle population, resulting in high mortality rate, low meat production and poor quality of wool. All this has increased the financial burden on the farmers, who rely on natural pastures at altitudes that exceed 4,000 metres.

Now, with the help of the research staff of the Netherlands-based Information Centre for Low External Input and Sustainable Agriculture ( ileia ), not only have they been able to control the spread of the disease, but have also successfully treated the affected animals ( leisa , Vol 15, No 1/2).

Some causes of the increasing frequency of the parasitic disease were identified as grazing in infested pastures, whether natural or cultivated; lack of preventive treatment of the sheep; lack of awareness of the rate/cycle of occurrence and lack of preventive practices to control the vector which causes the diseases.

There have been traditional ways of controlling distomatosis. For instance, adding copper sulphate and salt to the animal feed as well as a dose of wild artichoke leaf extract or a combination of bell pepper, red nettle and sharp lemon. Amazing results have also been obtained by using a dose of a preparation made from a native shrub known as shipita ( Columnella abovata ).

Traditionally, local communities have been treating distomatosis with shipita , which involves soaking dry leaves from the shrub overnight and, after straining the concoction, mixing the liquid with oil. Half a bottle of this medication is fed to each adult sheep.

ileia decided to adopt this local practice and arrangements were made with the development committee of the peasant communities. The committee decided that the work would take place in six communities involving four to six farmers per community.

The experiment was designed for 10 adult animals from each flock. Half were treated with shipita and the rest of the animals formed the control group. The experiment was repeated 16 times in all the six communities. The results of the experiments confirmed the effectiveness of shipita in controlling distomatosis as a low-cost alternative for the sheepbreeders.

In 30 days, a 15-30 per cent weight increase was recorded in the treated animals, their appetite improved and they became more active as the days went by. Some of the sheep had been losing wool. After receiving the dosage, they started recovering and the quality of wool improved. Besides, when the animals were slaughtered a month after the treatment, it was found that the quality of meat had improved significantly. The carcasses weighed more and there was no evidence of distomatosis.

Furthermore, laboratory tests on the faeces of treated animals proved that the dosage of shipita extract was 87.5 per cent effective in controlling distomatosis in adult sheep. Only 12.5 per cent of the animals still had a low degree of infestation. Based on the results of the experiments, ileia launched the campaign on a larger scale.