A top secret Soviet nuclear complex contaminated its environs for 40 years, exposing thousands of people in the vicinity to radiation 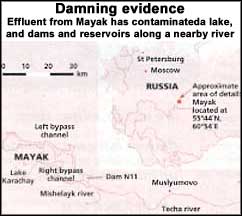 MAYAK, a nuclear energy facility in the former Soviet Union that remained shrouded in secrecy for over 40 years now, has been identified as perhaps the most disastrous, according to a recent research report. Though not as well- known as the nuclear power plant at Chernobyl, the Mayak complex is responsible for a comparable environ- mental legacy: more than twice the amount of radioactive material released in the accident at Chernobyl has been dumped in a nearby lake since 1951 (Environment, Vol 39, No 1).

A relatively small lake, one km long and half a kin wide, with a maximum depth of only six metres, Lake Karachay is probably the largest open accumulation of nuclear waste in the world. According to measurements, the level of radioactivity in the lake is as high as 120 million curies (curie is the standard measurement of radioactivity, equal to the number of disintegrations (3.7 x 1010) undergone by one gramme of radium in one second).

The vast complex of Mayak, created in the late 1940s to produce plutonium for nuclear weapons, is situated near the city of Ozersk in the southern Ural mountains. It became operational in 1948 and continued producing plutonium for nuclear weapons until 1990. Since then, Mayak has been used to reprocess fuel from nuclear reactors and to produce special radionuclides. Although current operations are on a much lower scale, radio -contamination problems remain.

The complex was a disaster from the start. A design flaw in its radiochemical plant forced workers to clean filters used to separate the plutonium and uranium by hand, exposing them to very high levels of radiation.

Disposing of the plant's radioactive wastes was also a major problem. The easiest way out was to dump them in a lake, the Techa river, which river flows through the area. From March 1950 to November 1951, approximately 2.5 million curies of radioactive waste was released into the river.

From 1949 to 1956, at Mayak released approximately 76 million cubic metres of waste with a total radioactivity of 2.86 million curies into the Techa. As a result, 28,000 people living along the river were exposed to substantial doses of radiation. Even now, a number of large reservoirs and dams along the Techa house low-level nuclear refuse.

As many as 20 serious accidents are known to have occurred at Mayak, including seven 'criticality events'. Criticality events, in which a spontaneous chain reaction releases lethal neutrons and gamma radiation, are relatively rare. Only 13 such events occurred in the Soviet Union during the 40 years in which it was producing nuclear weapons. In comparison, eight such events took place in the us.

On September 29, 1957, a major accident took place when a storage tank containing high-level radioactive waste exploded with a force equivalent to 70 tonnes of TNT. Approximately 90 per cent (18 million curies) of the radioactive material released by the explosion settled in the immediate vicinity of the tank.

The level of wastes dumped into Lake Karachay exceeds those released into the Techa. These can pose a hazard in the surrounding area by either 'resus pension' in the air or by contaminating groundwater. On windy days, large amounts of radionuclides are lifted from the surface of the lake in the form of mist, which can travel long distances before settling down. To prevent this, Russian authorities are now covering the entire surface of the lake with hollow concrete blocks. The project should be completed within a few years, and will eliminate one source of contamination. But groundwater contamination is a more serious problem.