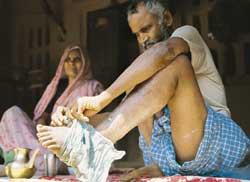 a homoeopathic drug may offer a ray of hope to arsenic victims. An Indian study claims that Arsenicum Album-30 can help remove arsenic from the body. But allopathic doctors stressed the need for a more rigorous trial.

The study was conducted by a team of researchers from West Bengal's University of Kalyani and Bidhan Chandra Krishi Viswavidyalaya. "The drug reduced arsenic levels in blood and urine of arsenic victims from Ghetugachhi village in Nadia district," says Anisur Rahaman Khuda-Bukhsh, who headed the team. "The blood levels of the toxicity denoting liver enzymes (like aspartate aminotransferase) returned to almost normal levels after three months," he adds.

Encouraging results in mice led the researchers to test Arsenicum Album -30 on humans (allopathy does not have a treatment for arsenic-induced toxicity). The subjects for the trial were arsenic-affected residents of Ghetugachhi village, who were divided into two groups -- group i comprised 55 people, while group ii had 68.

In group i, 22 subjects were treated as controls, who were given a placebo, while the remaining 33 arsenic-affected villagers were given Arsenicum Album-30. The drug or placebo was given twice daily for 10 days.

In group ii, all subjects received the drug twice daily for 10 days at the same dose as for group I. The medication was withdrawn for 15 days and repeated twice in the same manner. The subjects were provided arsenic-free water (less than 10 parts per billion or 10 ppb). Their blood and urine samples were periodically taken and studied.

The researchers also observed an increase in the level of glutathione -- a compound comprising amino acids, which indicates recovery of normal liver function. "The drug considerably checked lipid peroxidation, a lethal free-radicals-induced chain reaction that destroys liver cells' membrane," write the researchers in a recent issue of Evidence-based Complimentary and Alternative Medicine (Vol 2, No 4).

In another study, published in the March 2006 issue (Vol 3, No 1) of the same journal, the researchers showed that two potencies (30 and 200) of the drug brought high levels of anti-nuclear antibodies (a type of antibodies that work against the body tissues) to normal in arsenic victims from Ghetugachhi and Dakshin Panchpota, another village in Nadia district.

But allopathic experts are critical about the findings. "Other tissue markers like hair and nail, which are lacking in the present study, need to be studied to judge the effects of any drug trial," says Subhash Mukherjee of Calcutta Medical College, who studies arsenic-affected people in Murshidabad district.

The increased blood glutathione level "suggests some counteractive effect of the drug on oxidative-stress caused by arsenic. But estimation of liver enzymes has its limitation to assess chronic toxicity," says D G Majumder, a member of the state's core committee of the Task Force on Arsenic. "But, this treatment has a potential to benefit poor victims," he adds. Treatment costs a mere Rs 7 per month for a family of four.

The villagers are elated about the drug. Sadhan Haldar, a 40-year-old farmer from Dakshin Panchpota, says, "One-and-a-half years ago, with no appetite and severe arsenic-induced lesions, I was on the brink of death. But the drug cured skin lesions and restored appetite. And I resumed farming." Adds Khitish Bagh, a 30-year-old victim in Ghetugachhi, "After taking the drug, I regained appetite and arsenic-induced skin damage disappeared."

How the drug acts remains unclear. "We have already shown efficiency of homoeopathic drugs in protecting or repairing arsenic-induced dna damage in mice," says Khuda-Bukhsh. "The homoeopathic drug may trigger a cascade action of relevant genes back to their normal functioning turning on the body's recovery," he concludes.