Anti-cancer potential of yellow jessamine can be enhanced 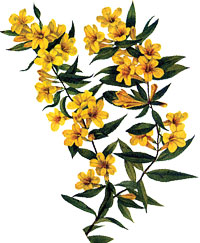 NANOPARTICLES are the latest breakthrough in cancer treatment. They can ferry anti-cancer drugs into the malignant cells while sparing neighbouring healthy cells, thus, eliminating side effects that accompany cancer therapies.

Biologists from the University of Kalyani in West Bengal recently tested their effectiveness in carrying a homoeopathic drug. They carried out experiments on extracts of yellow jessamine (Gelseum sempervirens), which was recently discovered to have anticancer properties. They prepared a drug from yellow jessamine extracts and encapsulated it with nanoparticles of an organic, biodegradable polymer, poly(lactide-co-glycolide).

Since homoeopathy drug works on the principle of dilution, aggregation of drug molecules could reduce the efficacy. Khuda Bukhsh said this can be averted if the nanoparticles have a large negative potential. Then they will repel each other.

Arun Sankar Chatterjee, a doctor formerly with Calcutta Homoeopathic Medical College and Hospital, said a lethal dose of the drug in animal tissues should be ascertained before the medicine is used.