Honey, I shrunk the land 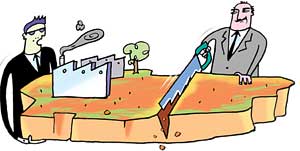 arcelor Mittal, Jindal Steel and Power and Bhushan Steel may lose some of the land allotted for their proposed plants in Orissa, with the state government deciding to reassess the land requirement of industries. The focus is on the steel industry, which accounts for the bulk of investments in Orissa.

Until now the government had no yardstick for assessing how much land an industrial project requires. In 2006, it asked the engineering consultancy firm M N Dastur & Co to provide basic guidelines for land allotment to steel projects. The firm submitted its report about three-and-a-half months ago.

In the light of the "benchmarking" report, the government realized that some companies had been allotted land in excess of their requirements. It has asked the Industrial Promotion and Investment Corporation of Orissa Ltd (ipicol), the nodal agency for the promotion of industry in the state, to hold back the excess land allotted.

The Industrial Infrastructure Development Corporation, which acquires land for industrial projects, has also been told not to give possession of the excess land to project promoters. "If any firm has been allotted more than the required land, the excess land should not be handed over to it," said Biswa-bhusan Harichandan, the state industries minister.

Although Harichandan refused to disclose how much excess land was allotted to steel projects, sources in ipicol said more than 10 industrial projects, the majority of them steel plants, had been allotted about 1,410 hectare (ha) of excess land.

The government has signed 49 agreements for setting up steel plants, with the proposed investment of about Rs 200,000 crore.

Arcelor Mittal, which is setting up a 12 million tonne per annum (mtpa) steel plant at a cost of Rs 40,000 crore at Patna in Keonjhar district, has been allotted 3,240 ha against the 3,130 ha needed, according to ipicol's assessment. Jindal Steel and Power, which is investing Rs 13,135 crore for a 6 mtpa plant in Angul district, has been allotted 2,300 ha against its assessed requirement of 1,520 ha. In case of Bhushan Steel, which is setting up its plant at Meramandali in Dhenkanal district, the allotment of 810 ha has been pruned to 560 ha by ipicol. The proposed project of Rungta Mines at Koira and Jharband has been reduced from 400 ha to 390 ha, SMC Power Generation's proposed Rs 141 crore steel unit at Hirma has been shrunk from 110 ha to 100 ha.

"This way we are going to save at least 25 per cent of the allotted land," said a senior ipicol official directly involved in the process of reassessment.

The report recommended keeping in mind four kinds of requirements while allotting land to a steel plant. First is the processing units it will require depending on the technology it uses; second is auxiliary units, including stores and repair shops; third is ancillary units, including administrative blocks; and fourth, other facilities like raw material complex, ash pond, slag dump, water reservoir, roads and railway system within the plant area and the mandatory green belt.

Each project has to use about one-third of the land allotted to it for creating a green belt, while about 8 per cent of the land should be used for plant's roads and railway system. It has also recommended storage capacities required for the raw material complex, water reservoir, ash pond and slag dump.

The criteria evolved by Dastur & Co does not take into account requirements like residential area for plant personnel and the corridor for water, railway and power outside the plant limits. "It is the crucial responsibility of entrepreneurs to minimize the plant area by optimizing the plant layout by following good engineering practices," stated the report, which has come up with six models stipulating the land requirement for steel plants of different capacities using different production techniques.

For example, one model is a 2 mtpa plant making steel bars and rods by using the classical production process based on blast furnace and basic oxygen furnace. Its land requirement has been fixed between 395 ha and 423 ha. There are plants that use modern route based on electric arc furnace, using steel scrap or sponge iron or direct reduced iron as raw material, and those that combine both modern and classical techniques. The land requirement depending on various models can vary from 223 ha for 1 mtpa to 1,487 ha for 6 mtpa.

As for the land the government hopes to save through reassessment, ipicol's managing director Ashok Meena said it may be allotted to companies if they go for expansion.