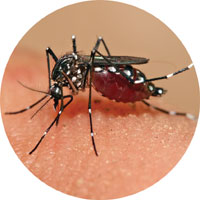 MALARIA and dengue claim millions of lives each year. Insecticides are losing their edge in the fight against these diseases. The reason: a growing resistance in mosquitoes against these chemicals and a change in behaviour patterns in females of Anopheles stephensi and Aedes aegypti, which spread malaria and dengue respectively. Researchers from Defence Research and Development Establishment in Gwalior have synthesised an aromatic chemical, propyl octadecanoate (PO), that attracts the mosquitoes and modifies their behaviour. It, thus, acts as a deathtrap when mixed with insecticides.

Female mosquitoes identify sites for laying eggs using their vision as well as sense of smell. The researchers exploited this trait to synthesise PO, which consists of aromatic stearic acid, commonly found in insects.

The researchers carried out an electroantennogram, a standard test to ascertain that the antenna of an insect can sense a chemical. They exposed egg-carrying females of A stephensi and A aegypti to various concentrations of PO in air and water. They found that the antenna of the females showed four- and fivefold increase in response at 1 ppm and 10 ppm concentration of PO in comparison to a control chemical.

If tablets of PO are dissolved in a bowl of water mixed with a fast acting insecticide, the smell can stimulate female mosquitoes to lay eggs there. “As soon as they touch the water for laying eggs they will be killed by the insecticide,” says Thangaraj Seenivasagan, the lead researcher,. The study was published in the October issue of Acta Tropica.