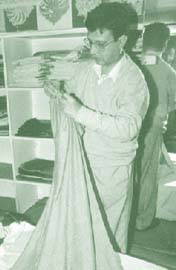 Led by the Worldwide Fund for Nature ( wwf ), conservationists have warned that if the growing trade in shahtoosh wool does not stop, the Tibetan antelope, known as chiru , will become extinct. There is a ban on the nefarious trade since 1979 under the Convention on International Trade in Endangered Species of Wild Fauna and Flora ( cites ). Yet, according to wwf , about 20,000 chiru s living on the Tibetan Plateau are poached each year for their valuable coats and only an estimated 75,000 animals remain in the wild. Poachers either shoot the antelopes in herds with automatic weapons or use leg-hold traps.

Shahtoosh is smuggled into Kashmir, where it is woven into shawls and scarves. These products have long been used as prized dowry items in India. The coats of three to five chiru s are needed to make one shawl, which can cost up to us $5,000. Judy Mills of wwf pointed out that it was incorrect to say that shepherds follow chiru herds to pluck their precious hair from the bushes they brush against while grazing.

She emphasised that chiru cannot be shorn or plucked, and that the animal must be killed to obtain its precious hair. "We're asking people to say 'no' to shahtoosh ; not to sell it, not to buy it, not to wear it," Mills appealed at a news conference. Shahtoosh has long been acknowledged as the 'king of wool', and it means "from nature and fit for a king" in Persian. It is so fine that it measures just one-fifth the width of human hair.