We are producing less CFCs - the main agent for ozone depletion. That, say experts, is a good sign 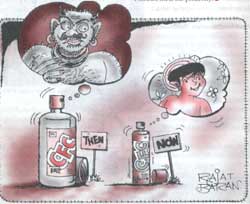 THE mid and late-1980s witnessed global tension rise when scientists discovered a hole in the ozone layer of our planet's atmosphere. This, they said, could be dangerous as ozone shields us from the Sun's ultraviolet (UV) radiation that can cause skin cancer. The main culprit responsible for "punching" the hole, said the scientists, was a group of chemicals called chloroflurocarbons, better known to us as CFCs. Soon there was a universal disapproval for CFCs, which find extensive applications in refrigeration and aerosol industries.

Well, how have things gone for the ozone layer in the intervening years? Rather well, reply environmentalists and scientists. According to statistics recently published by the US-based environmental organisation World Watch Institute, there has been a record fall in CFC production, by as much as 40 per cent, since 1988. This rapid fall in CFC production has even been hailed as "a dramatic success and the most impressive achievement in terms of extensive international cooperation". What highlights this achievement further is the fact that ever since British scientists reported the ozone hole in 1985, CFC production had peaked.

Scientifically, CFCs break down in the Earth's upper atmosphere, creating free-chlorine atoms that interact with ozone, producing chlorine monozide and oxygen. This leads to a slow depletion of the ozone layer. According to the US National Academy of Sciences, an ozone depletion of three per cent would cause 20,000 new cases of skin cancer in the US alone, UV radiation is also known to cause cataract and retina damage and can even weaken the human immune system. On an ecological level, UV rays can be disastrous. Research conducted in Australia and the Philippines indicate that UV radiation damages basic food crops, such as wheat and rice, and obstructs the process of photosynthesis and nutrient intake. However, through a series of treaties and exemplary efforts by several nations - the US, for instance, was one of the pioneers, banning CFCs in spray cans - the production of these chemicals have been curbed. But, say scientists, it is a little too early to congratulate ourselves. To expect the ozone depletion to stop immediately would be naive. It will take years before the CFC threat is over and Earth regains the ozone cover that it has lost during the last two decades. Scientists say that CFCs can take up to 15 years to reach the upper layers of the atmosphere. Which means chemicals released, say even a decade ago, are yet to inflict damage to the ozone layer. What is indeed important, however, is that this process should continue and should be encouraged if not for this generation, then for posterity.